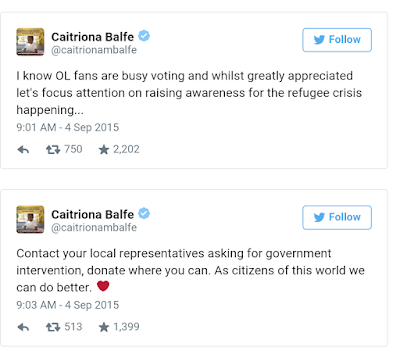 OUTLANDER star Caitriona Balfe has voiced her support for the Syrian refugees.

The Irish actress, who plays Claire Fraser in the Starz time-travel series, took to Twitter to raise awareness of the ongoing crisis in Europe.

The number of refugees entering Europe has reached record levels and the UN have confirmed that the vast majority are running from conflict.

She added: "Contact your local representatives asking for government intervention donate where

you can. As citizens of this world we can do better.

People around the world being urged to donate cash and clothing to help refugees fleeing Syria.

A number of Scottish charities have launched emergency appeals to alleviate the ongoing crisis in Europe.

Glasgow the Caring City hopes to send a 40ft container of aid to the Balkans where it will be distributed by volunteers.

Meanwhile, the Scottish Catholic International Aid Fund (SCIAF) said refugees with nothing more than the clothes they are wearing are in desperate need of supplies.
Find out about the ways you can donate and help ease the refugee crisis here.


Posted by Outlander Homepage at 8:17 AM