Through passion, teamwork and creativity, the Outlander clan showed the world how it's done...


Sam Heughan has been voted Radio Times TV Champion 2015. And now that Outlander fans' tireless work has paid off, we'd like to celebrate the ingenious ways in which the clan won Sam his victory.

The tournament saw them rack up millions of votes as Sam triumphed in Sci-Fi and Fantasy Champion before an astonishing 16.5 MILLION votes over an epic three day final battle with Ricky Gervais finally crowned him Champion of Champions.

So how did Outlander fans achieve this feat? Through passion, creativity, teamwork and a sense of fun, that's how. The clan worked together, spurred each other on and spent sleepless nights making sure that Sam got the best chance possible.

Here's a look back at how the glorious battle was won....

The Outlander clan showed just how serious they are by staying up all night to vote, spurring each other on – and even keeping fit in the process...

When Sam faced a tough fight from Poldark's Aidan Turner in the Drama Champion final, the clan gathered their troops and did everything they could to get Sam his place in the Grand Final, working their voting fingers to the bone! 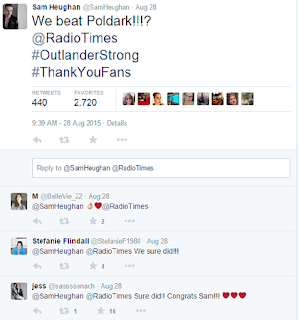 It's clear that Sam's victory couldn't have happened without the fans working together as impressively as they did. Across the globe, members of the Outlander clan world worked in co-ordinated shifts to get the maximum votes possible. 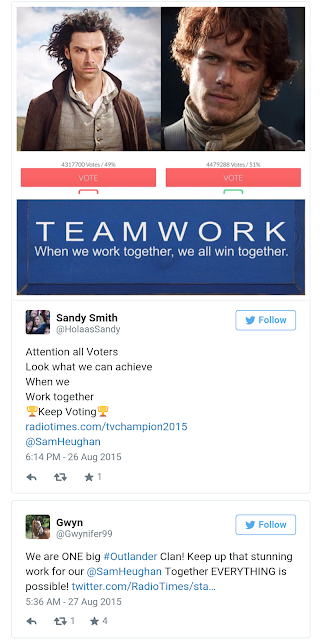 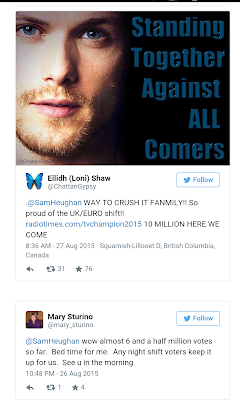 Fans went to amazing lengths to show just how much Sam Heughan means to them, inspiring each other (and us) with inventive memes and artwork. 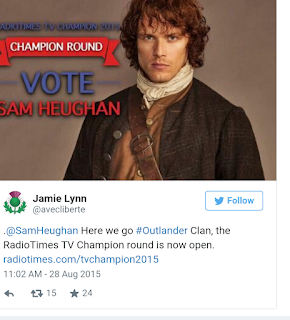 A Sense of Fun

As we got close to the end of the Grand Final between Sam and Comedy Champion Ricky Gervais, the clan got involved in the actors' Twitter exchange about the (not necessarily completely serious) possibility of Ricky guesting in the new series of Outlander. 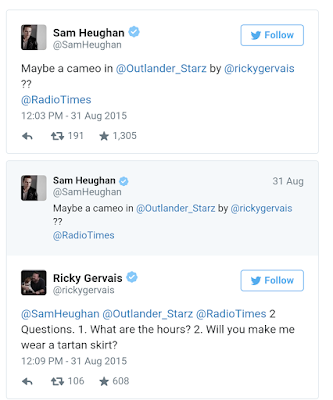 Fans made it all the more fun by contributing excellent ideas like this... 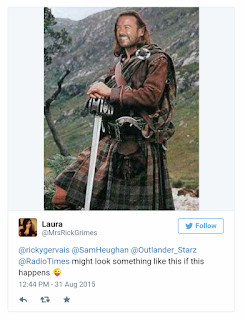 Even while being a perfectly-organised clan who worked tirelessly to get Sam his win, there was a real sense of joy from the fans. 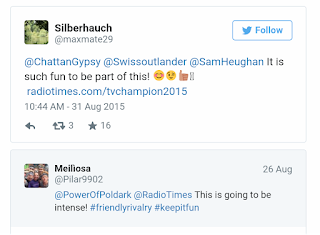 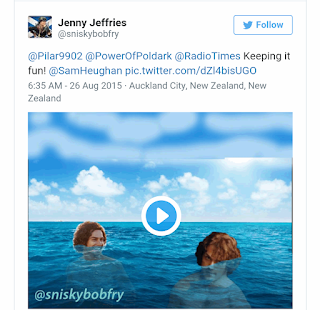 And it all made the TV Champion winner incredibly happy and proud to have a fandom as strong as his.... 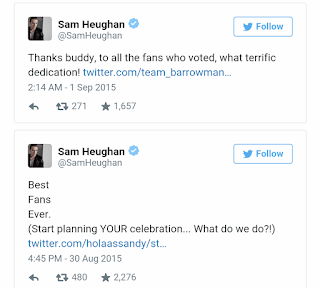 Posted by Outlander Homepage at 1:01 AM