TV Network Under Fire After Omitting Breastfeeding Scene From Broadcast..

Many fans of the Starz series "Outlander" were up in arms this past Sunday night when Showcase, the television network that broadcasts the show in Canada, aired a censored version of the newest episode. Specifically, they were upset to see that the network cut a scene that shows Jenny, a character who had recently given birth, express milk from her engorged breasts.

"Outlander" is a time-travel drama set primarily in 18th century Scotland and in the past has featured a fair share of nudity and violence, including rape and murder. Some Twitter users pointed out the double standard in censoring a breastfeeding-related scene while keeping the moments that show breasts portrayed in a sexual way. 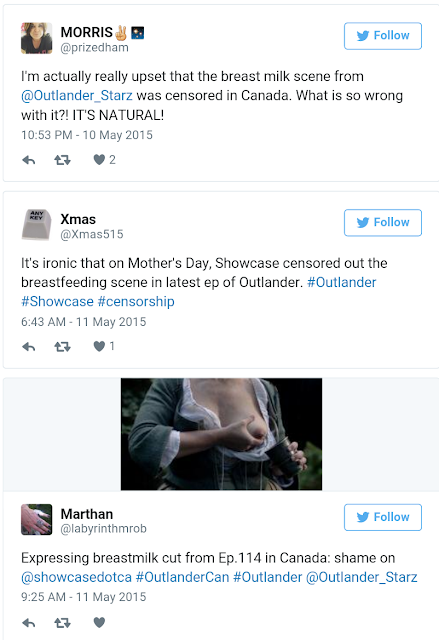 Actress Laura Donnelly, who plays Jenny on the show, expressed her excitement about the scene in an interview with Vulture last month. "We're very used to seeing breasts displayed sexually on-screen, and I thought this was an opportunity to show breasts for what they're really there for, in a completely nonsexual manner, that really turns the tables," she said, adding, "It's an absolute necessity at that point for her, and she doesn't think twice about it. It's not something that should be hidden away in any sense, and it's certainly nothing to be ashamed of."

In a statement to The Huffington Post, Christine Shipton, Senior VP and Chief Creative Officer of Showcase's parent company Shaw Media, said that the scene's omission was not intentional. "Showcase is the proud home of 'Outlander' in Canada. As with all of our previous Sunday night airings, it was our intention last night to air the newest episode of 'Outlander' uncut. However, as a result of an error, an edited version of the episode 'The Search' was broadcast in its place," she wrote, adding that Showcase would re-broadcast the uncut version of the episode on Sunday, May 24 at night and during the daytime slot on May 17 ("edited for daytime appropriate language only").

The network posted a similarly worded apology on Facebook, but many fans remained displeased. "I call B.S." Stacey King commented. "Why was there an edited version at all?" Maryann DiMarco-Rhodes asked.

Whether or not it was truly an error, this incident has sparked conversation about the portrayal of nursing in media and how that reflects current attitudes about breastfeeding, particularly in public. And if there's one takeaway, it's that mothers will advocate for their right to feed their children and normalize the sight of breastfeeding in today's society.
Posted by Outlander Homepage at 3:32 PM