Q&A with Outlander Kitchen: Perfect Recipe for a Happy Hogmanay

After becoming disenchanted with her nine to five career and graduating from culinary school, foodie, and avid book lover Theresa Carle-Sanders, decided to turn her passions into profit with her "Food from Fiction" concept, inspired by a dish in the third installment of the Outlander saga, Voyager.  Already a food blogger, she turned her talents to creating Outlander Kitchen with the blessings, and encouragement from Diana Gabaldon, who wrote the forward for Theresa's Outlander Kitchen Cookbook, due to hit bookstore shelves Spring 2016.

OutlanderHomepage:
When you first started your food from fiction project with Diana Gabaldon’s Outlander novels, did you research and experiment to compare the difference between modern cooking techniques and utensils, versus the totally made from scratch, by hand methods used in the 18th century, and what that might have on the final result of a recipe? Does having the conveniences of the 21st century make a difference, or does a dish taste the same either way?
Theresa Carle-Sanders: When I first started, I chopped and kneaded everything by hand, just like Mrs. Fitz, Jenny and Mrs. Bug would have done. After all, the three most important tools in any century’s kitchen are your hands and a sharp knife. But, just as the ladies I mentioned above, all had at least one kitchen maid to help them, I eventually began to incorporate modern machines into my Outlander Kitchen.
A standing mixer makes kneading stiff whole-wheat bread dough a breeze, and allows me to multitask, while the machine does all the work. As well, I think all of the cooks in the Outlander series would have appreciated the convenience of a slow cooker, which carmelizes a batch of onions for Bangers and Marsh with Crockpot Onion Gravy with nary a second glance at the pot.


Outlander Kitchen encourages fans to get back into the kitchen and cook from scratch. Whether we use modern appliances or just the basic tools cooks have used for centuries, the most important thing is for all of us to reconnect with the food we eat. "I believe how we nourish our bodies has a direct impact on our happiness."

Outlander Homepage: Diana’s novels span decades, cultures, not to mention the countless unforgettable characters from the Highlands of Scotland, to the Parisian courts, to the hunter gatherer lifestyle of back country living in colonial North America. Do you have any favorite dishes, characters, or book scenes that inspired a particular recipe?

Theresa Carle-Sanders: I have developed a number of character-inspired recipes over the years, including Mr. Willoughby’s Coral Knob, Black Jack Randall’s Lavender Fudge and Laoghaire’s Whisky Sour. One of my favorites, and one I know Diana particularly enjoys, is Stephen Bonnet’s Salted Chocolate Pretzel Balls, which came about after a particularly funny exchange with some Outlander friends on Facebook.
I love food, history and reading. I could quite happily keep myself occupied with one or the others all day long - the evolution of Outlander Kitchen over the years means that I now spend my working day cooking, researching and reading about food across three centuries and a dozen different countries. After all, Outlander stretches across three centuries, and it’s characters travel from Scotland to France to America and back again, with many stops in between. It really is my perfect job.


Outlander Homepage: It’s the New Year/Hogmanay and if someone wanted to cook an Outlander style dinner or serve traditional 18th century Scottish food, which of your recipes, food & drink, would you recommend?

Theresa Carle-Sanders: One of my favorite celebratory meals from Outlander Kitchen is Roast Beef for a Wedding Feast. It’s a delicious easy-to-prepare main course, that takes fans right back to Claire and Jamie’s first night as man and wife, without scaring off friends and family that may not be so immersed in Diana’s fantastical story. Make some roast potatoes and Ian’s Buttered Leeks to serve alongside for a Scottish-inspired meal everyone will love.

A pan of Colum’s Shortbread, and/or the more modern Millionaire’s Shortbread (with caramel and chocolate) is always welcome around a Christmas sweets table, and a late-night Highland Coffee spiked with your favourite dram washes everything, including the stress of the holidays, clean away.


Outlander Homepage: You have the Outlander Kitchen Cookbook coming out this Spring 2016, Did you ever imagine that you would actually one day be working with Diana Gabaldon, and publishing your very own cookbook based on the food/meals in her best selling novels? What has that experience been like?

Theresa Carle-Sanders: Yes, Outlander Kitchen: The Official Outlander Companion Cookbook is currently available for pre-order from a number of online retailers. It is currently scheduled for release on June 24, 2016.


It’s the joyful culmination of five years of work on Outlander Kitchen and I’m thrilled with the way it’s come together – just a glance at that beautiful cover is enough to make me smile every time!
I pursued the idea of a cookbook very early on with Diana, but it took a number of factors, including the production of the TV series, and a bit of luck, for my dream to come true. I am eternally grateful to everyone who supported me along the way. I couldn’t have done this alone. 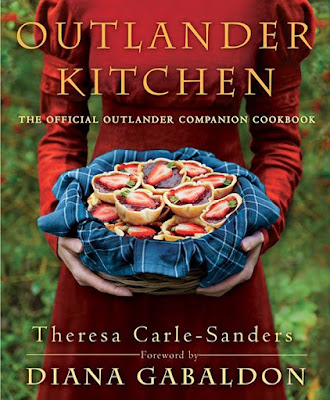 “The food was either terribly bad or terribly good,” Claire had said, describing her adventures in the past. “That’s because there’s no way of keeping things; anything you eat has either been salted or preserved in lard, if it isn’t half rancid – or else it’s fresh off the hoof or out of the garden, in which case it can be bloody marvelous.” (Diana Gabaldon, DOA)


Outlander Homepage: If you could spend the day cooking in their kitchen with them, which one of Diana's characters would you want to spend that time with? Why?

Theresa Carle-Sanders: Without a doubt, it would have to be Aloysius O’Shaughnessy Murphy, the ship’s cook aboard The Artemis in Voyager. He’s an ornery sort, like most of us cooks, and he reminds me a lot of my first Chef Instructor at culinary school, Chef Patrice.
They won’t abide a stupid question or a lazy sous chef, but if you’re there to learn, they make the very best teachers – just remember to keep your head down, your mouth closed, and your knife moving.
Ith do leòr! (Eat Plenty)


Theresa Carle-Sanders lives with husband ("her Englishman") Howard, on Pender Island, near Vancouver, British Columbia. Please visit her at outlanderkitchen.com, and you can pre-order her upcoming cookbook at the links listed below.


Hogmanay (Scots: [ˌhoɡməˈneː], Scottish English: [ˌhɔɡməˈneː] HOG-mə-NAY) is the Scots word for the last day of the year and is synonymous with the celebration of the New Year (Gregorian calendar) in the Scottish manner.

Eleven-fifty,” Brianna declared, popping into the surgery after me, her own cloak over her arm. “I just checked Mr. Guthrie’s watch.”
“Plenty of time. Are ye coming with me, then?” Roger grinned at Bree, seeing her cloak.
“Are you kidding? I haven’t been out after midnight in years.” She grinned back at him, swirling the cloak around her shoulders. “Got everything?”
“All but the salt.” Roger nodded toward a canvas bag on the counter. A firstfoot was to bring gifts to the house: an egg, a faggot of wood, a bit of salt — and a bit of whisky, thus insuring that the household would not lack for necessities during the coming year.
Diana Gabaldon, The Fiery Cross (Chapter 35)

From Outlander Kitchen for Hogmanay: 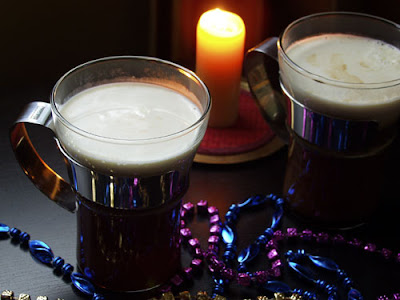 Stir together 1 tablespoon of sugar and 1 oz whisky in the bottom of each of 4 glass coffee cups. Pour ¾ cup coffee into each cup and stir well. Slowly pour 2 tablespoons of cream down over the back of a spoon into each cup, so that the cream floats on top of the coffee. (Watch what I’m talking about here.)

Serve, passing the whisky as required.

Posted by Outlander Homepage at 8:06 PM