Great info on Season 3, which Ron D Moore is assuring the news media will happen. Let's hope so.. VOYAGER by Diana Gabaldon, is a great story and adds our favorite supporting characters, like young Ian. 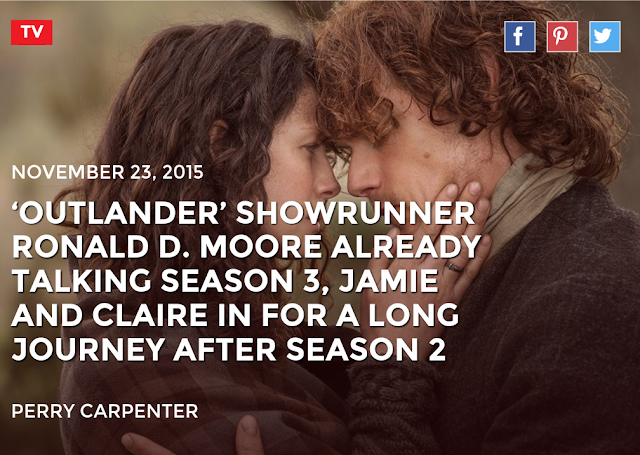 Although Outlander is currently in production for Season 2, that hasn’t stopped Ronald D. Moore from thinking ahead about future seasons. In fact, according to Movie News Guide, Moore recently discussed the possibility of a third season and what might lie in store for Jamie (Sam Heughan) and Claire (Caitriona Balfe).

Given the overwhelming success the show has enjoyed in its first season, it doesn’t come as a surprise that Moore expressed confidence that Starz would give him the green light for a third season.

“I’m very hopeful. We’re talking about doing a third season now and I’m pretty sure we’re going to get it,” Moore stated.

This confidence stems from the high ratings Outlander was able to to constantly produce throughout its first season. Additionally, the show has already been given a few online awards and nominations for its adaptation of Diana Gabaldon’s best-selling series, which goes well beyond what is set to be featured in the first two seasons of the show.

With a third season all but promised, what is in store for Jamie and Claire after Season 2? According to Cinema Blend, Moore revealed during Comic-Con that the third season would be based on the events in the third book of Gabaldon’s series, titled Voyager.

With that in mind, the season is set to include a number of intense sailing scenes, which is something Moore, and fans everywhere, are very excited about.

I can’t wait to get out to sea. That’s what [I like], doing the tall ship section… I want to do the whole sea chase; that whole section is really going to be fun,” he revealed. “I’m sure it will be really hard and I’ll regret it as soon as I start doing it, but I’m looking forward to it.”

The third season is set to follow Jamie and Claire after the events in book two, which involved the Jacobite Rising. This means that the two lead characters will be once again leaving Scotland to venture across the sea to Jamaica. While the details concerning the plot are still undetermined, fans can expect to see the characters spending a lot of time on the ocean.

Jamie and Claire will spend most of Season 2 in France. [Image via Starz]

In terms of how he plans on approaching this seafaring adventure, Moore revealed that he would be relying on a lot of CG to get the job done. Given how much TV has advanced in the CG department, it will definitely be exciting to see what Moore and company come up in Season 3.

“The technology now, between real ships like what they have in Black Sails and CG, it’s now developed to a place where you can believe it,” Moore stated in the interview. “It’s no longer just the models on the water tank at Paramount, which is clearly like this big. Now you can really realize on a television budget what Pirates of the Caribbean was doing 8-10 years ago. Now, we can actually do better CG than that on the television front.”

While fans eagerly await more news concerning Season 3 of Outlander, the second season is still in production. This means the network’s decision regarding Outlander Season 3 will be largely determined by how well the show does in the upcoming season. Even still, with all the success and huge fan base the series gained in Season 1, there is little doubt that the show is headed for an early renewal at the least.

Until that happens, fans can wait in earnest for the new season of Outlander to premiere sometime in early 2016.

Posted by Outlander Homepage at 7:50 AM