"All Things Outlander" our Sunday Chats on twitter.
By Nancy M Guillory

It's one thing to be strolling through the Royal Gardens having to "fake" a polite conversation with the snotty little French beauty who, 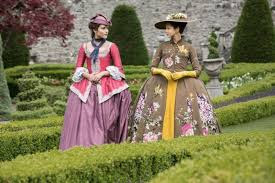 your husband was once head over heels in love with, but it's a whole other, when the guy who raped and tortured your husband comes strolling along.

Was it as shocking for viewers as it was for Claire? One ATO participant was on the ball:

Railie Douglas ‏@KiwarrakRaili: "I'm pretty damn good at interpreting & reading between the lines! I had it figured."


While the show this season is following the books in storyline, the Dragonfly in Amber chapter about Black Jack Randall's return, was totally different.

Black Jack and Claire run into each other, literally, in a corridor at the Duke of Sandringham’s home. Shocked at first from the collision, it takes a few weighty sentences for them to realize, but book fans freak before reading the lines, they know from the "persons" description Claire runs into, who it is!

Missing from the show was Jamie's "stoic" natured comments to Black Jack when there eyes first met. (Jamie goes looking for Claire and sees the interaction)

Like the book, the show did have Black Jack’s first emotional reaction to Jamie's presence, but Jamie shut him down in the books, by uttering "never use my name" and "you may when it's the last thing you say"....
Grabbing Claire by the elbow and turning her, to walk away with all of his gathered height and strength!


Loving this seasons masterful way of getting to Diana Gabaldon’s story, with a few missing book elements that are favorite Jamie lines, and this unfortunately is one of them..

Getting back to the topic, it was impossible for Jamie to behave that way infront of the King as the show introduced an undead Black Jack at Court. Therefore the show runners had the King belittle a very unsure, unconfident Jack Randall on Jamie's behalf and with our blessing...

One of our "we will never know" moments, as if the King felt the tension between Claire and Black Jack at first approach and thus took care of her as a gentleman would, is indicated by the Kings question: "what would your Scottish warrior husband think?" (Of her acquaintance) 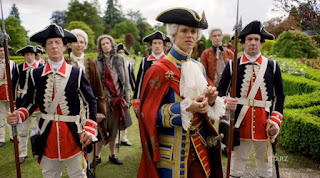 The King and France, are no friends to the English in that time period. Showing up at court in full rigor as a Red Coat was the proper clothing etiquette for Black Jack, but totally un-impressive to the King of France as war wages between the two countries.

As the King suggested, Black Jack Randall was brought to his knees to beg, an example of what he would need to do to get his brother Alex, his Job back with the Duke of Sandringham.

On top of the pleasure it brought Jamie and Claire, who by the way, the King seemed fond of infront of Black Jack, we as fans loved the twist that the show provided...

Our Favorite All Things Outlander Chat Tweets, go to the following lovelies....

Nayarit Briceno‏@nayaritb1 May 8
@OutlanderHome "ooh I am so looking forward to the next one. So far, this season is simply magnificent".

Cherylguidry‏@CdguidryCg
@OutlanderHome  "I didn't think much of the king until he made BJR kneel cheered Viva LA France"!

Posted by Outlander Homepage at 3:24 PM