A lot happens in episode 206. Most of the storyline was directly from Diana Gabaldon's book. My subject for this chat is Murtagh knowing about Claire’s time traveling, which was not in Dragonfly in Amber.

So how much of what Murtagh learned from Jamie in this episode came from The Exile? (Diana Gabaldon's graphic novel, from Jamies perspective of Outlander) Or how much came from the show writers?

(In The Exile, Murtagh watches Claire come through the stones. In those times and the reason all those stories were made into songs, "200 years" refers to "Once upon a time" and back then, they all believed).


It made sense to have Murtagh on the inside of the secret Jamie and Claire are keeping,

since he has more of a role on the show and his character flows with the story.


Why did Murtagh listen to Jamie's entire explanation and refer to Claire afterward as a Witch?

And was it Gaelic or Druid that Murtagh yelled to Claire in season one episode one, when he saved her from BJR the first time?

This would indicate a nod to The Exile, and Jamie's version of Outlander. Maybe Murtagh knew more then Claire thought. Was this in the episode?

A Druid was a mystical healer, a Priest, who worshipped nature.

When Claire comes through in The Exile, Murtagh finds her, he calls her a Druid, then an Auld one, he follows her, and is distraught when Dougal takes her, and even more suspicious of her when Jamie says, "he wants her"!

I wanted to know what other fans thought the writers were thinking? Druid might explain Murtaghs easy acceptance of Claire, but I could be wrong! I loved the episode. I wanted to cover all of it but of course there was too much going on: 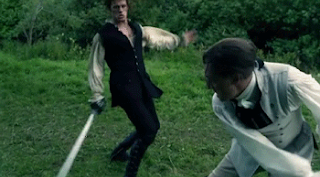 Jamie and the "duel" with BJR and why he went back on his word to Claire that he would wait a year before killing Randall. 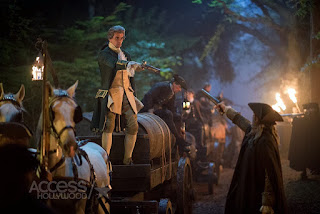 The shipment raid that Jamie and Murtagh orchestrated to thwart money going to the Bonnie Prince and exactly what, other then profit, Comte St Germain's interest may be? 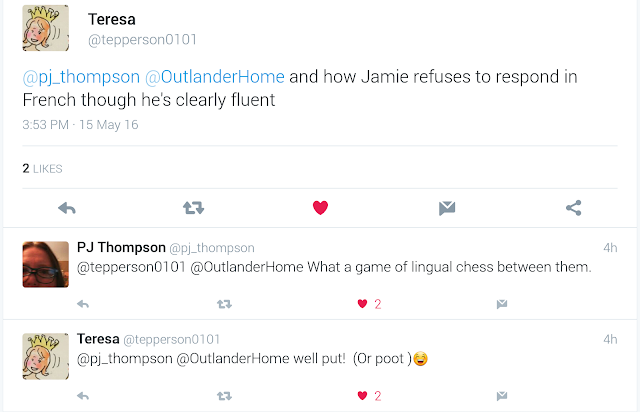 Claire rushing to the duel site. She is afraid to utter a word, doubled over in pain and holding her baby bump, bleeding down her legs. The authorities gallop through to stop the duel and the show ends!


But the most intriguing is Murtagh’s storyline. Jamie confessed to the lengths they have gone to change history .

The Murtagh storyline opens with Jamie explaining why he would not be dueling with BJR, but without any satisfying detail Murtagh is growing frustrated. He wants to just kill BJR, and is positive the "lad" can do it!

Later in the story, Claire is trying to fake Small pox with her herb experiments using different concoctions to achieve believable symptoms. 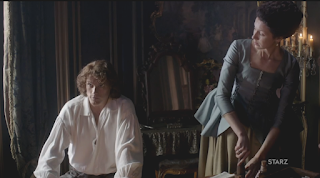 Murtaghs frustrated again, asks why they are doing that, instead of just killing the Bonnie Prince, who is dillusional.

Murtaghs is not understanding why Jamie, a Highlander, a warrior with skill, is not taking the stance "an eye for an eye"!


Jamie finally tells Murtagh everything. We see them in the courtyard, pacing, circling, and as Murtagh’s eyebrows fly up, 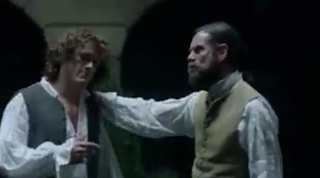 (so expressive) understanding finally dawns on his face.

Jamie gets punched in the jaw!

Murtagh seemed to take this news almost too well and expresses to Jamie, "If he believes that Claire is a "witch" it's fine, he should have told him these secrets earlier". Things are better between the men now that Murtagh punched Jamie?

We then see Murtagh writing, as Claire enters the study inside, "you lived through all these years" he asks. He wrote each year Claire existed in the 1900's

before she falls through the stones.

Claire responds, giving him the dates she was born, and became a healer.

Murtagh is compassionate towards Claire, what she has had to deal with knowing when, if and how, people will die at Culloden.

A lovely, moving moment between them that started with the "Search" episode in season one! 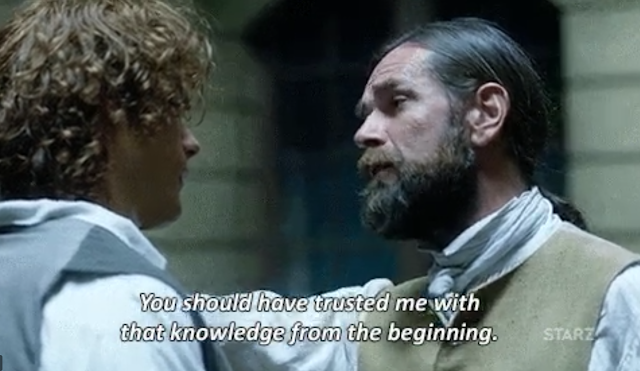 Here are a few notable tweets:

Posted by Outlander Homepage at 11:17 AM