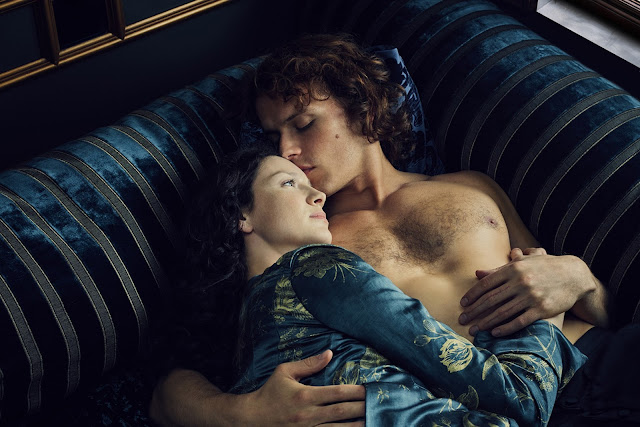 To read the rest of the article
http://www.vanityfair.com/hollywood/2016/04/outlander-recap-episode-4-sex-scene?mbid=social_twitter

When Diana Gabaldon’s Outlander book series came to TV last year it was heavily praised for its innovative depiction of on-screen sex. Yes, the relationship between Claire (Caitriona Balfe) and Jamie Fraser (Sam Heughan) is another romance between two very attractive people, but there was an earned intimacy and somewhat unusual emphasis on the female gaze that put it a cut above the gratuitous-feeling sex you might see on other shows. But still, with its time-traveling, swashbuckling adventure, and recurring tropes of the bodice-ripping genre (Gabaldon’s books are sometimes shelved in the Romance section), Outlander could still be dismissed as sexual fantasy. That is, until this week’s episode, “La Dame Blanche,” which featured a sexual reunion between our two leads and grappled realistically, in two different cases, with the impact of sexual assault.

Heughan’s character Jamie was sexually assaulted at the end of last season, and the spectre of both his abuse and his abuser (Tobias Menzies’s perfectly villainous Jack Randall) hung like a shadow over the past three episodes. “You haven't seen the sex up to now,” Balfe said in an interview, in reference to Season 2’s sexual drought, “because they've been struggling with their intimacy, because Jamie’s struggling with the trauma from the attacks of Black Jack.” It’s extremely rare for any show, let along one with dashing virile heroes, to explore how the male psyche grapples with sexual assault.

The Frasers took so long to give into their simmering chemistry last year that anyOutlander fan had to feel the frustration of another separation, but thanks to the surprising news that Randall is still alive, Jamie makes a breakthrough. The prospect of having his revenge on his abuser—presumably the 18th century version of therapy—allows Jamie to re-connect with his pregnant wife in a searing-yet-sweet sexual encounter. And to ground the moment in reality, Claire’s swollen stomach is the center of attention.

“Sam and I, we kind of fought to keep the belly,” Balfe says. “I think originally they were just a little bit like, ‘Maybe nobody wants to see that.’ But—especially because their intimacy has been so disrupted—it was so important to us to show that this is their safe place. Diana had written me the most beautiful email about pregnancy. She was so honest and so articulately beautiful about the process. The good things and the bad things. We talked about how sexual pregnant women feel and how that can be such a strong feeling, and to relegate that and to not use it I thought would have been a real disservice to the journey of this couple.”

Outlander, ever mindful of the female perspective, allows Claire to express her own frustration at being sexually disconnected from her husband. Even as Jamie rightfully gets the bulk of the dialogue to process his trauma, Claire asks him to consider her feelings of isolation. Yes, the sex between Claire and Jamie is the steamy stuff of prestige cable drama—belly and all—but it also feels weightier. “We’ve always been so adamant in the show that if we’re going to show sex, and if it’s going to be part of the show, then it has to be an integral part to the storyline,” Balfe explains. “And it has to tell you something about where this couple are at.”

The sexual reunion between the Frasers isn’t the only way “La Dame Blanche” explodes sexual fantasy. The affair between Louise de La Tour and Charles “Bonnie Prince Charlie” Stuart threatens to tear apart the nascent Jacobite Revolution. At least, Claire and Jamie hope it will. Jamie drops the news of Louise’s pregnancy—the very real consequence of a sexual encounter—like a bomb at the Fraser dinner table.


But the most significant upending of sexual fantasy comes when Mary Hawkins—Claire’s young, virginal, swooning friend—is attacked in the street. The episode established Mary’s school-girl crush on Randall’s younger brother, Alex, with Fergus explaining to Murtagh how she’s displayed all the signs of romantic (and sexual) attachment. But Mary’s innocence (and, given the strict societal rules of the time,and marital prospects) are destroyed when she and Claire are attacked by masked strangers in the streets and Mary is raped. The camera’s treatment of the rape is unflinching but not exploitative. There’s nothing titillating about the violence (which is mercifully kept brief) and Mary’s distressed and bruised face is the focus throughout.

The whole scene plays out again in mirror when Mary wakes up in the Fraser household to find the object of her affection, Alex, watching over her. Unlike somerecently-assaulted cable drama characters, Mary doesn’t fall gratefully into the arms of her concerned love interest. She shrieks, she fights, she runs, and when he tries to calm her down by pinning her to the ground, this just makes matters much worse. In a TV climate where the use of sexual assault as narrative device is unavoidably controversial, Mary’s trauma is treated respectfully and, most importantly, is all abouther character’s development and journey.

And so from tender sex between a pregnant woman and her husband, to a sensitive depiction of sexual assault, Outlander proves again that it’s far weightier than its reputation.
Posted by Outlander Homepage at 8:11 AM