Outlander: Tobias Menzies on why Black Jack is so obsessed with Jamie

For the rest of the article please refer to both of page. 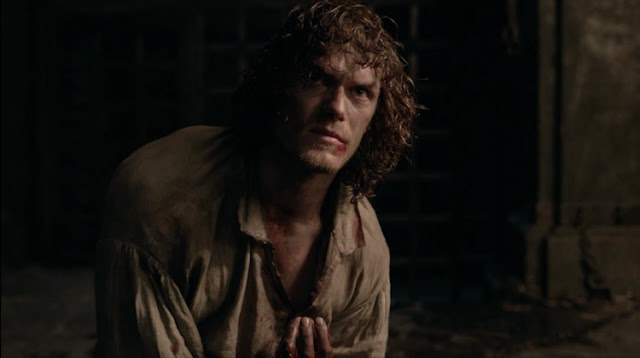 In tonight’s episode of Outlander on Starz, Claire Fraser’s worst nightmare is realized when she lays eyes again on Capt. Jonathan “Black Jack” Randall (Tobias Menzies), the man who savagely raped her husband Jamie back in Scotland. EW asked Menzies to explain what drives his alter-ego and why he’s so hell-bent on conquering Jamie.

TOBIAS MENZIES: I don’t think he hates Jamie. I think he is stimulated by him, intrigued by him. I think in some way Jamie represents everything that Jack isn’t, and you both love and want to destroy the thing that you can’t be. As someone who is interested in pain and people’s pain thresholds, he flogs Jamie and Jamie is able to withstand more punishment than he’s ever administered to anyone. So I think he finds Jamie to be a remarkable person. Yes, he’s twisted, but it’s a sort of rugged, weird respect.

That sounds even more evil!

Yes, it is dark, but it is an expression of his truth, I guess, of his war experiences. That is the honest expression of his personality. And yes, it’s hugely dysfunctional, though it doesn’t mean there isn’t admiration and respect and love in those interactions.

He isn’t really a study in homosexuality. That wasn’t really the thing, and I’m not sure Jack would describe himself as a homosexual. I think sexuality wasn’t as clearly defined as it is now. I made the decision that it wasn’t a love story about Jack’s love for Jamie, that it was more an exploration of his sadism, and in Jamie he finds someone who is a remarkable foil and a remarkable opponent in his journey as a sadist, rather than about a love story between the two of them.

Posted by Outlander Homepage at 3:47 AM