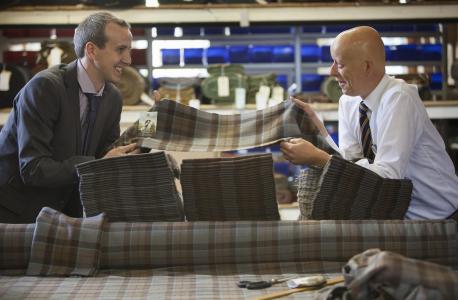 A TEXTILES business is hoping for a revenue boost after agreeing a deal to
produce official merchandise inspired by the Outlander television series.
Ingles Buchan is close to finishing its first weaving order for Canadian merchandise distribution business AbbyShot.

Glasgow based Ingles Buchan, which also owns the Anthony Haines Textiles business in Selkirk, had previously created hundreds of metres of tartan cloth which was subsequently used in the television show.

The programme is based on the Outlander series of novels by Diana Gabaldon.
Those sees English nurse Claire Randall travelling back in time from Scotland in 1945 to 1743 where she meets Highlander Jamie Fraser.

The Outlander television show, backed by Sony Pictures, has been shown on the Starz network in the US and is available on Amazon Prime in the UK.
The lead roles are played by Caitriona Balfe and Sam Heughan.

Ingles Buchan is being supported in the merchandise venture by a six-figure funding package from Clydesdale Bank.

The goods, including hats, scarves and shawls, are being woven in Selkirk before the products are finished in Glasgow.
They will then be sold across Canada and Europe. Ingles Buchan stated it is also working for United States distributor The Celtic Croft.

Colin Brown, Ingles Buchan managing director, confirmed the business has added two staff in Glasgow to take its team to 14 there.

Later this year the business will add a second apprentice in Selkirk to take employee numbers to 13 at that site.
He said: “We’re thrilled at becoming a supplier of genuine Outlander tartan merchandise. Producing the range will be a real boost for our business and our plans to grow.

“In recent years Scotland’s textiles industry has been in decline but we have shown that demand remains for high quality, traditional cloth.”

Mr Brown described the initial boost in turnover as “six-figure plus” with the potential for further increases if the ranges sell well.
He said: “There is no way of knowing how big this will be.

"The books have sold 30 million copies but that doesn’t necessarily translate into sales [of merchandise].

“Sony has been keen to make sure the goods are made in Scotland. It is a premium product.”

Ingles Buchan had already been fielding requests from Outlander fans about making tartan goods because of its association with the television production.
Producers were keen for the textiles used in the show, which is currently filming a second series, to have a traditional look.

Mr Brown said the businesses Ingles Buchan is partnering with have proven track records in the merchandise arena and are regular visitors to events such as Comic Con.

Bonnie Edgecombe Cook, president of AbbyShot, said: “AbbyShot is proud to be the provider of the official Outlander inspired and replica apparel.

“The Made in Scotland tag is so important to us as well as to the loyal fans of the show, and we couldn’t have asked for a better partnership than the one which we have with Ingles Buchan.”

Ingles Buchan has created tartans for football teams such as Rangers, Celtic and Barcelona in the past.

It also made a tartan to commemorate the Papal visit to Scotland in 2010.

The business has been a customer of Clydesdale Bank for around 30 years.

Deyrick Smith, Clydesdale Bank’s head of commercial and small business in Scotland, said: “We are proud to support Ingles Buchan, a strong and well managed business which is promoting Scotland’s textiles industry on a world stage thanks to its Outlander success.

"We look forward to working in partnership with the business as it grows and develops its product range.”

They already used the mill to source a number of Ingles Buchan products.

The first Outlander novel was published in 1991 and Ms Gabaldon has published a further seven books in the series. The most recent one was last year's Written In My Own Heart's Blood.

Much of the first series of the television adaptation was filmed in Scotland.
Posted by Outlander Homepage at 8:31 PM