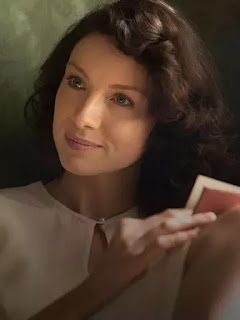 10 times CLAIRE FRASER SASSASMACKED THE PATRIARCHY
03 AUGUST 2015 09:58 AM
BY CONNIE VERZAK
OUR Outlander guest blogger Connie Verzak looks at ten times Claire leaned in when others may have pushed away.


EVERYONE loves a man in a kilt, but in my book there is much to be said for an intelligent woman who tells you to stuff it when you shush her.

My love affair with Claire Randall Fraser began in the books and Caitriona Balfe’s spirited portrayal only enflamed my lady-crush.

At the heart of Outlander’s chronicle of a marriage, this practical healer with knowledge of the future lives in not one, but two time periods when her outspokenness was not the norm.

It is maybe because of this that her agency is a thing of beauty, a unicorn out of time that trots on despite danger, convention and even her own better judgement.

The point isn’t whether or not Claire is always right —in fact she is often not— but that this is a woman who trusts herself as her best resource, and that’s a message that is crucial. The greatest love of all, ladies.

Here are ten times Claire leaned in when others may have pushed away:

Remember in the premiere when Claire subjugated her sexuality to her husband’s and resigned her needs to luck and fate? Of course you don’t, because that is not how the Notorious CRF rolls. What Claire needs, she is not scared to insist upon. Dust and creaky beds, you are on notice.

2. That time she volunteered as tribute.

When war broke out and her husband joined British intelligence, Claire could have stayed home and worked at home or in a factory to support the cause.

Instead, she joined the army as a nurse despite Frank’s objections and found an identity as a healer that has transcended space and time.

3. That time she tried to peace out.

After a brief flirtation with hopelessness post-stones, Claire brushed her shoulders off and came up with an almost-successful plan to escape Leoch.

Are we glad it didn’t work? SURE, but it’s a show of character from a woman who looked at a system that seemed unbeatable and thought to take an impossible chance before entertaining resignation.

4. That time she tried to change the tide of history.

When Claire realized the Mackenzies were Jacobites, she tried to protect them from the eventual outcome of the war. Claire cares deeply about others. It’s one of her most endearing qualities, and her affection for and knowledge of her adopted people informs her second marriage so deeply that it’s become the mission statement of Season 2. Now that’s influence!

5. That time she boomeranged from a bad situation into a worse one.

Claire’s encounter with British soldiers at the end of “Rent” seemed like a chance for salvation. However, once she realized she had entrusted her well-being to Lucifer, she exercised her prerogative to course-correct.

This is one of many times (*cough* escaping Willie *cough*) in which her instinct leads her astray but she doesn’t dwell, wallow or doubt herself. Claire knows her brain is as good as anyone’s and that includes the occasional mistake.

Anyone looking for a vanity-O is knocking on the wrong door if you come (ha!) to Miss Claire’s Sexporium. She could have lied, faked being asleep, or she could have given Meg Ryan a run for her money, but instead did none of those.

Claire owns her sexuality, and part of that is letting your partner know that you are just as entitled to a grand finale as he is. Sorry Jamie, you’ll have to try again. Maybe even a third time.

7. That time she gave her final word on corporal punishment.

When suffering through a ‘necessary’ spanking, Claire shouts, kicks and lashes out in enthusiastic disagreement before she is subdued – or so it seems.

At the end of “The Reckoning,” Claire forgives her husband but only after she makes the terms of access to her body VERY clear, taking back her power in a moment that is as delicious in its revengeful deviousness as it is memorable for its methods.

Don’t mess with a woman who knows how to use a scalpel.

8. That time she put hoes before bros.

Sure, Geillis was questionable, problematic and very nearly led to Claire’s death for witchcraft but the outsider friendship of two women who were unapologetically themselves and who backed each other in the worst of circumstances was one of the most satisfactory relationships of the season.

Love is great, y’all, but when people accuse you of being a handmaiden of Satan, there’s nothing like a girlfriend.

9. That time she exhausted all possibilities.

After Jamie was taken by the English, Claire got herself a Murtagh and tried everything short of alchemy and voodoo to get him back, and if she would have had access to either of those I bet she would have given them a go as well.
This was a time of great fear for her, and it could have paralyzed her. Instead it led her to acts both courageous and ridiculous, but always to action.

Great fight scenes and moments of sass are amazing, but so is the de-stigmatization of the expression of raw emotion that so often marks women as weak.

Claire is practical and methodical, but her emotions run deep, and their expression is always grippingly honest.

From her tortured goodbye in “Wentworth” to the demanding insistence of ownership and eventual despair of “To Ransom a Man’s Soul,” Claire teaches us that our loves don’t negate our minds, our instincts are worth following, the deepest strength can sometimes come from the frailest emotion, and that a woman with a good handle on herself might just change history.

And now I’m off to drink whiskey and work on my 1940s Claire/Peggy Carter cosplay, “Agent Fraser”.

NO ONE STEAL THIS IDEA.For more Outlander hiatus fun, follow Connie on Twitter @conniebv
Posted by Outlander Homepage at 8:20 AM