10 comedic moments from the books we need in Season 2 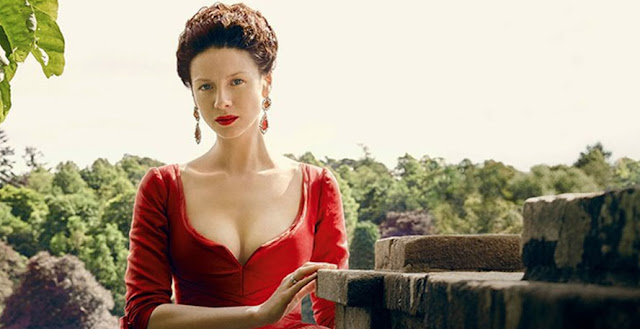 Outlander is a hit drama series, that as we’ve said before, isn’t as undefinable as you’d think. Just because Outlander is high quality drama, doesn’t mean that it doesn’t have some seriously funny moments.

Outlander fans know that one of the best parts of the series is the romance between Jamie and Claire. It’s a romance built on love, trust, and the both of them having a really good sense of humor. They both have a great sense of ironic, half witty, sarcastic comebacks, and have a way of not even taking themselves too seriously.
Last season, Outlander did a great job of bringing out the humor in the series from Clairending on Jamie in the hay, to drunken Dougal, to the Murtagh and Claire roadshow. Here’s a few of the moments we want in
season 2 that are straight out of the novel Dragonfly in Amber.

After spending almost a year in the 18th century, Claire finally gets to reacquaint herself with the hygiene of the 20th century. She takes the opportunity to have her legs and armpits waxed when invited for what would be the equivalent of an 18th century spa day by Louise. Alas, Jamie can’t quite see the point, and he is rather disturbed by Claire describing the removal process. Claire finishes her description with “Bob’s your uncle.”

Jamie’s perplexed response is, “My uncle Bob wouldna countenance any such goings-on!”

After going over the ins and outs of the wine business with his cousin Jared, Jamie returns home to Claire more drunk than she’s ever seen him. He stumbles about the room claiming that you’re not drunk if you can still stand up.

One of the best parts is Jamie suddenly getting poetic about Claire’s eyes, and relating them to the alcohol that he’s just drunk. “They’re the color of verra fine whisky, wi’ the sun shining through them from behind. I thought this morning they looked like sherry, but I was wrong. Not sherry. Not brandy. It’s whisky. That’s what it is,” he says.

In order to stand out at the French court, which was awash in glamour and decadence, taking fashion risks are required. Claire ends up in a red dress with cleavage that practically goes down to her navel. Although the dress was initially Jamie’s idea, he didn’t bank on it being quite so revealing. Claire lets Jamie know that she is not unprepared to thwart over zealous attention because she’s brought along a fan to swat the undesirable suitors. In her exclusive interview with us, costume designer Terry Dresbach talked about how difficult these costumes were.

Jamie takes a look at the fan and its proportion to the dress, and he makes a suggestion, “Do me the one favour, Sassenach. Take a larger fan.”

Jamie and Claire may be expecting their first child, but they are getting a real education in what they are in for with Fergus. Preteen boys are not known either in the present or the 18th century for their manners, common sense, or patience.

Jamie saves Fergus’ life after an ill advised horseback ride that nearly kills both of them. Instead of being sorry for his actions, Fergus says to Jamie, “That was fun, milord! Can we do it again?”

Few people can hold their ground against Jamie. The resident dog of L’Hôpital des Anges has no such fear. Claire comes upon Jamie talking to the snarling Bouton who is refusing to let Jamie into the hospital until his mistress gives the all clear.

Jamie is completely unaware that anyone has heard him trying to reason with the dog, “Think it over, laddie, I’m a damn sight bigger than you. I wouldna undertake any rash ventures, if I were you… Faster, too… I don’t have to put up wi’ this, ye ken.”

Bonnie Prince Charlie is just about as useless of a fop that ever lived. The most that can be said for him is that he is charming. The prince arrives in the middle of the night through the Fraser’s second story window after having fled Louise’s home via the rooftops when her husband comes home early. Of course, the self absorbed prince barely notices that this is inconvenient, and wants to have a good old chat with, “his friend James.”

Jamie describes dealing with the prince to Claire after the prince and Louise have a falling out, “He’s so distraught about that woman that I dinna think he even remembers he’s the heir to the thrones of Scotland and England.”

7. The facts of life

The comedy surrounding innocent, virginal Mary Hawkins practically writes itself. We’re not really sure what’s funnier, her asserting to a very pregnant Claire that she’s sure that Jamie doesn’t, “trouble her in that way,” or her complete lack of understanding about where babies come from.

One of Mary’s very best assertions regarding sex is when she tells Claire, “Men don’t do things like that where I come from.”

8. Fun with French and Gaelic

It’s always comic gold in attempting to speak a foreign tongue when people mispronounce words, don’t quite understand the nuances, or just plain use the wrong word. There are plenty of opportunities here in both Gaelic and French. In fact, Sam Heughan told us in an exclusive interview how bad he was at French during his school years.

Louise claims that saying “Dame Broch Tuarach” is too difficult. Instead she opts to shorten Claire’s title to “Dame Tuarach.” Claire takes it all in stride stating, “In fact, Broch Tuarach meant ‘the north-facing tower,’ but if she wanted to call me ‘Lady North-facing,’ it was all right with me.”

As my father would say, “He’s nothing special. At the end of the day he takes a dump like you and me, and his $hi+ still stinks.” In the court of the king however, it is a great honor to watch the king get up, get dressed, and attempt to “ease the plumbing” even though he’s severely constipated.

Jamie later describes the whole process to Claire, and how he offered the suggestion of eating porridge to the king to loosen things up. He refers to Louis as, “tight as an owl.”

10. Exploding Frasers, the next generation

According Scottish lore, “Frasers are stubborn.” We’ve seen Jamie’s temper often enough when things don’t go according to his world view. This time out we are looking forward to the next generation losing it. Fire poker through the window anyone?

Outlander is back for season 2 this Saturday on Starz.

If you liked our list of comic moments, then you’ll love our weekly, post-show, Outlander Google Hangout called Hangoutlander. Hypable’s Laura and Kyle join the crew from That’s Normal each week, where we talk about the recent episode in a lively fun, funny, and slightly irreverent way. Make sure you catch this week’s show here. You can sign up for a reminder.

For the full Article and many more at this site
http://www.hypable.com/outlander-10-comedic-moments-we-need-season-2/

Posted by Outlander Homepage at 7:31 AM