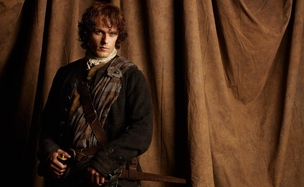 In what is being hailed as the second golden age of television, adaptations of books to the small screen are proving all the rage. The Sookie Stackhouse novels gave us the hit vampire series True Blood and George R.R. Martin’s Game of Thrones has become a TV phenomenon.

So it’s no wonder Diana Gabaldon’s series of epic Outlander novels (originally published as Cross Stitch) has also been tailored for TV and, like other book-to-small-screen adaptations, is proving a hit with viewers.

Gabaldon’s books — which have sold 26 million copies — follow the adventures of Claire Randall, who during a second honeymoon in 1945 is transported back to Scotland in 1743, where a Jacobite rising is brewing and she falls in love with Highlander Jamie Fraser.

Unlike the TV series, the books have a mainly female fan base so it’s no surprise that Scottish-born Sam Heughan hadn’t heard of Gabaldon’s work when he was asked to audition for the role of Jamie.

“I bought the book and read the appropriate scenes, I didn’t have time to read the whole book as I was auditioning the next day,” Heughan says by phone from Sydney, where he is promoting the second season of Outlander.

“I just felt very close to the character and felt I understood where he was coming from, then realised what an amazing world it was and how many fans it had.”


Heughan got the part and instantly won Gabaldon’s approval. Rather than being daunted about living up to her expectations, he says her endorsement was a boost of confidence.


“I think it was very noble of her and generous of her to put her weight behind it,” he explains.
“She’s been great, she’s been a great source of information and friendship ... we talk a lot. She’s still guiding the show, I think, from afar — she’s definitely got her eye on it — and I think it’s softly helping us all to build this world she created.”

Heughan says the chance to play Jamie allowed him to rediscover his country of birth but there was also a lot he needed to learn before he could slip into the Highlander’s kilt.

“We did a boot camp, we had a few weeks where we bonded with the other Highland members,” he says.
“We were taught to horseride; I’d ridden a little bit before but wasn’t very confident and now I love it and it’s a big part of the show for me.
“And also the sword fighting and learning Gaelic, which is obviously very complicated and very hard to learn.”

Jamie is a born-and-bred Highlander but the sensitive side of the initially sexually inexperienced fighter helped win the hearts of women around the world.

“He is a big warrior, I had to bulk up a bit for it and adapt my body a little bit to resemble him but he has a sensitive side, and he’s thoughtful and intelligent and witty,” Heughan says.
“He has a lot of attributes that I aspire to, he’s a pretty decent guy. I think he’d be a good drinking buddy as well.”

And while the love story between Jamie and Claire (Caitriona Balfe) has kept female readers and viewers happy, Heughan believes the show’s appeal for men probably has a lot to do with the action.

“There’s obviously the central figures, there’s the romance between them, but there’s a lot of history involved, a lot of action. There’s the supernatural side and there’s the politics, and season two certainly has an equal amount of that,” he says.
“It’s a rough world, it’s a tough world and it’s a man’s world that Claire is entering into in the 1700s, and it’s a world we’ve kind of lost and I think men maybe like to think about how they would survive in that world.”

Heughan says filming conditions on set is a daily game of endurance.
“Honestly, it’s like The Revenant,” he says, in reference to the Oscar-winning film set in a severe, cold snowscape.
“We’re outside a lot in the Scottish climate ... we had some heavy, heavy storms, in Scotland there was a lot of flooding and bad winds, gale-force. So there were times when I think we all thought ‘How do we do this’.”
But weather isn’t the only harsh aspect to shooting the series, with season one ending with Jamie mentally tortured and sexually assaulted by Redcoat Captain “Black Jack” Randall (Tobias Menzies).

“Myself and Tobias (Menzies) both come from a theatre background so we rehearsed those scenes with the director and the producers and the writer for about a week, like you would a play,” he explains.

“They were a pretty intense few weeks, very tough physically as well as emotionally because we had a lot of prosthetics on and that would take many hours before shooting and also afterwards.”

Season two, based on Gabaldon’s book Dragonfly in Amber, starts with Jamie still suffering mentally in the aftermath of the attack. After absconding from Scotland, Jamie and Claire must start anew in France.

“He’s taking on a different personality, a different guise, he has a new wardrobe, a new demeanour,” Heughan explains.
“He’s now a laird in the French court and it’s a different world to the one he’s use to but he learns to adapt and be deceitful. But it doesn’t sit well with him because he’s a very honourable and loyal person.
“Ultimately, it also creates a gap between him and Claire and it all kind of implodes on him. It’s interesting to see that change in him and to see him learn and grow.”

The second half of season two sees Jamie and Claire returning to “Scotland in the mud and the blood and the rain”!
Posted by Outlander Homepage at 5:49 PM