The Wonderful Wizards of Outlander, All things Outlander by Nancy M Guillory Episode 202!

Calling this week's Outlander episode "titillating" might be considered a bad pun, but I'm going there anyway. "  "Not in Scotland Anymore" revealed many long anticipated events, characters, costumes, and scenes going above and beyond the masterful artistry we are accustomed to, providing an abundance of fodder for this week's "All Things Outlander" open online chat.

Last night's topic, (in case you missed it) was discussing the four C's of the show: Costumes, Casting, Creepy, and Crappy.  Naturally, the costuming was again exquisite, as Terry Dresbach seems to out do herself with costumes that become more and more exquisite with each new scene. 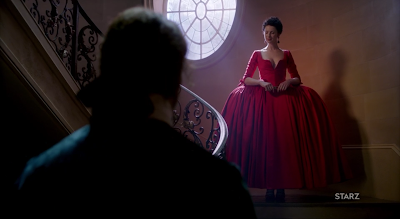 Claire's fabled red dress was gorgeous, mainly because of the simplicity of the gown, with little to no embellishment, the cut, and color alone, made the dress stand out.
In reference to the scene where Jamie and Murtagh see the dress for the first time,

Amaryles Simmons @SimmonsAmaryles  tweeted: "I think both he and Jamie went blind when they saw Claire."
and
Erin Quy @ErinQuy so perfectly tweeted about the red dress,:"You know they did!!! Spectacular dress, Beautiful woman in it!! I want that dress as decor in my house!!"

Of course, while Claire's ensemble posed the threat of over exposure, the now famed "nipple dress" took the term decolletage to an entirely different level, complete with jewel encrusted swan nipple piercings (Terry is a frigging genius!!!) 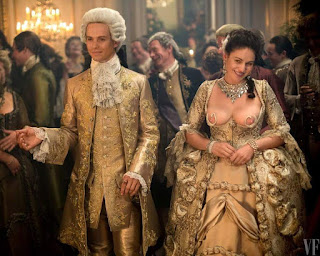 Murtagh certainly appreciated his first "exposure" to King Louis court, although the dress beyond the open bodice was a work of art. As,

ChannelingClaire @t_corona tweeted, "The show is so well done. The costumes! Smh at the details n beauty of them."

Erin Quy @ErinQuy summed it up nicely, earning an ATO TOP TWEET with: "My husband said "Wait, what?? Oh Wow!" Brava to Terry, her team and the actress who pulled it off! It was greatness!"

Arguably, and often times aggravatingly so, book fans can be much like poor King Louis's bowels, excessively constipated over novel to screen adaptations.

Episode 202 caught many of us by surprise by introducing Alex Randal at the end of the hour, hence bringing up the topic of casting. 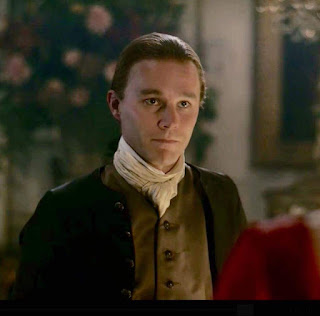 Several followers expressed slight disappointment that Tobias Menzies wasn't  playing the role of his brother, considering they were almost doppelgangers in DIA. I think,

Jamie @MsTaterCakes offers a very valid point of view with her tweet: " I think that would have been overkill. Love Tobias, but they were brothers, not twins."

Others were more concerned with the way the scene was written.

Mamacita @stelle7112 tweeted: "Was a bit disappointed that Claire and Jamie don't find out about BJR as they do in the book. Everything else is OK."

Another aspect of the impeccable casting of out favorite show is who Outlander fans love to hate, and who we absolutely adore, besides Jamie and Claire, that's just a given.
With so many villains to choose from, it's hard to determine who Outlander fans hate more, but there seems to be a three way tie between, Black Jack Randal, Laoghaire, and the Duke of Sandringham. Over all I'd say BJR would win out, but in this particular episode, 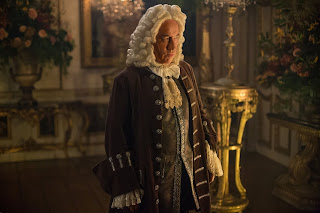 Amaryles Simmons @SimmonsAmaryles told us how she really feels about the D of S with this tweet: "Awful! Yes! That "toe-jam" Sandringham knows just how to get on my last nerve!"
TOP TWEET on the subject of  Sandringham goes to:
TKayeKerr @nannyTT "I would like to smash Sandringham in the face. #GetHimMurtagh"

Get in line, honey, because I think we'd all like to open a can of "whooped ass" on Duke Dickhead!

The other new character that created a great deal of discourse, and speculation, was the Bonnie Prince Charlie himself.  I suggested he might be a serial killer or the kind of guy who parks near the elementary school with a bag of candy, were he alive today, and general consensus was in total agreement.

Susan Williams @51_sdwms tweeted: "I was a bit surprised at how he was portrayed! Was glad to see it tho, I hate when historical peeps are romanticized."
The only romance Charles Stewart is gonna find is the kind he pays for in that fancy brothel where he met Jamie and Murtagh!  Yet, speaking of the art of lovemaking... 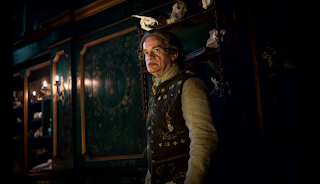 Most loved new character goes to Master Raymond, played by Dominique Pinon. Not only does he appear just as most of us picture him from the book, but Jon Gary Steele once again transported us to the most mysterious of places with his vision of the apothecary shoppe.

ATO TOP TWEETS go to,
TKayeKerr @nannyTT "I have to say I LOVED Master Raymond and that set!! Loved so much! #getmealadder."
and
Erin Quy @ErinQuy "I could spend days in his Apothecary!!!...Brava to Gary and his tean for that!!"

Overall, it was a wildly popular episode, proving that Ron isn't wasting any time, yet isn't leaving out the highlights we expect to see. Naturally, we all adore the Frasers, yet it is refreshing, and fun to see Duncan Lacroix's beloved Murtagh get some time in the scene stealing limelight. 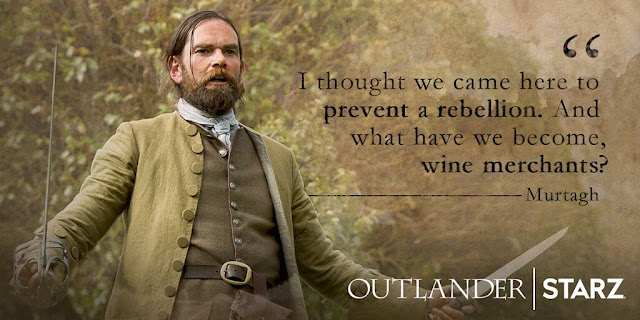 So, episode 202 goes down in the All Things Outlander record books, with Murtagh taking top prize for best performance!

ATO TOP TWEETS go to,
Kathy Brown @kjkbrown2003 "First, I will say this episode belonged to Murtaugh (despite dresses, boobs and honeypots) He owned it!!"
And to,
Delina Thriemer @LinaDee03  for summarizing just about everyone's sentiments regarding the entire episode with her tweet: "Fav parts were the red dress reveal, Murtagh the entire epi, & the honey pot line/scene had me lmao. Loved Raymond's set 2."

Adding something new to the ATO recap, I couldn't  leave out this conversation about an Outlander theme park....

Join me, @NancyMGuillory each Sunday from 7-8pm CST on @OutlanderHome for open discussions about ALL THINGS OUTLANDER! Until then, Slainte mhath!

Erin Quy ‏@ErinQuy 16h16 hours ago
Posted by Outlander Homepage at 10:06 AM