First, I'd like to apologize to our All Things Outlander chat followers for being late to the party Sunday, because I was late coming home from a party. Dorianne stepped in for me, and got things kicked off, but by the time I was able to join in, I think most everyone was watching Game of Thrones.

But, nonetheless, we did have a few great responses from followers who had seen Episode 203, and were very much pleased with the introduction of three of the novel series's most popular characters, Fergus, Bouton and Mother Hildegarde.


Appearing just as we all have envisioned our favorite little street urchin,

Fergus has been brought to life by the adorably mop-headed Romann Berrux.


Bouton, although described as a fluffy, small white dog in the book, is also charmingly scruffy, light brown,

and blessed with the ability to sniff out disease and infections. ATO Top Tweet on this subject goes to:

Kathy Brown @kjkbrown " Yes. I think my favorite character is now Bouton (and I'm a cat lady)"
I'm right there with you Kathy!


Mother Hildegarde is exactly as we envisioned as well, stoic, smart, dignified and played beautifully by Frances de la Tour. 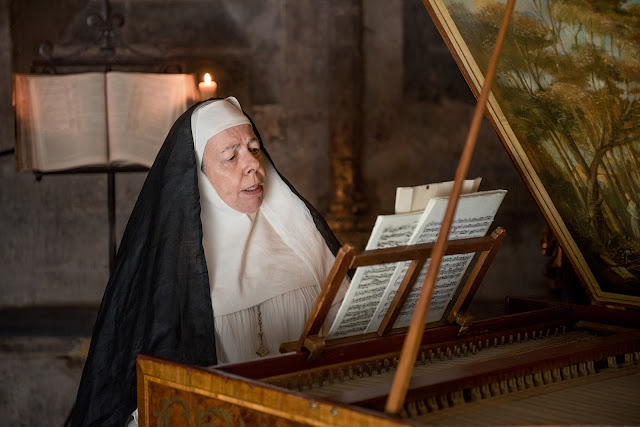 I did mention the interchange between Claire and Master Raymond, after their rather awkward and uncomfortable encounter with the Comte St. Germain, asking if anyone realized Raymond was trying to warn Claire about the bitter Cascara? 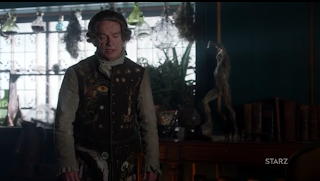 Naturally the book readers picked up on that instantly, but I was pleased to see a couple of comments from show only fans, who suspected the cascara reference was important..... Good looking out there y'all! 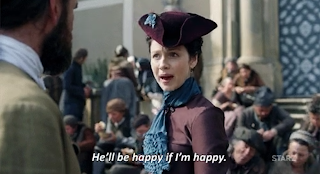 Two things I didn't get a chance to touch on due to my late entrance to the ATO chat party was, did anyone else (in the book as well as the show) think Jamie was being a rather fractious wanker about Claire working at the charity hospital?

And although urine is sterile, was anyone else grossed out by Claire's lab testing protocols? 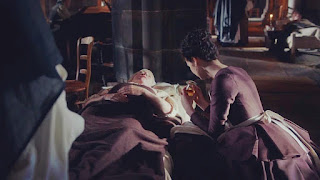 Now, I couldn't let the chat end without a reference to the noticeable fact that things aren't as steamy in Jamie and Claire's bedroom, as they are in Suzette's attic room.
Murtagh is stealing way more than the limelight it appears, and I for one am thrilled that this very important character is getting humanized in a very real way. 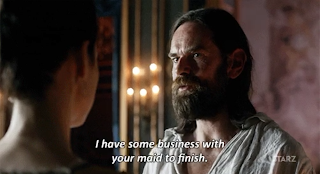 The great thing about adapting a novel for TV is the B characters get a chance to fill out the bigger plot, with their own unique stories, that aren't always greatly detailed in the book(s).

The growing divide between our beloveds, 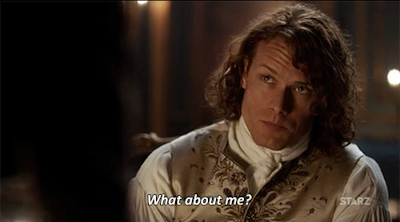 Jamie and Claire was painful to endure in the books, and just as miserable to watch on screen.
As I have often stated, and will continue to do so, we try to squelch the spoilers for our show only followers, but having read DIA at least 3 times and listening to it religiously on audio books, 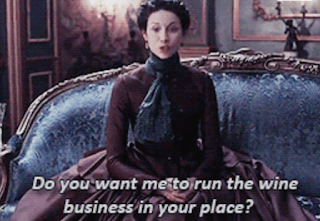 I feel obligated to offer fair warning about future episodes with my other pick for ATO Top Tweet from:

CindyB@coloradogal12 "Have read DIA twice now and it has me weeping like a wee child every time."

Join me, ON TIME (I Promise!) next week for All Things Outlander live chat starting at 7pm CST @OutlanderHome. Until then, check out Susie's recap of each episode right here on our blog page, and follow us on Twitter. Slainte mhath!