'
Outlander' Postmortem: Yes, Diana Gabaldon Was in Support of That Season 2 Premiere Twist!

By Carrie Bell to read the rest of this amazing article Warning: This postmortem for the “Through A Glass, Darkly” episode of Outlander contains episode, series, and even a few book spoilers.

Outlander executive producer Ronald D. Moore knows he’s probably gonna get some hate mail from the book purists now that one of the biggest secrets of Season 2 is out of the bag.

“There are still people who are mad about the wedding ring, and that was a fairly small change compared to restructuring the order of book two, starting in the 1940s instead of the 1960s, and enlarging Frank’s part to make him largely more sympathetic,” Moore says. “But I feel good about the changes we made, and I am well aware after doing Battlestar Galactica and Season 1 of this that you are never going to make 100 percent of the people happy 100 percent of the time. That is just how it goes.”

Maybe it would help the haters to know that their spirit animal, author Diana Gabaldon, is still singing the praises of the TV team, even more so than last year given that she wrote an episode and feels more a part of said creative crew, and is not only fine with the adjustments that were made, but she actually thought it was a “good way to handle a complicated story” given the restraints of episodic television.

“I always enjoy these tiny interpolations that they have to do to make the structure work. It makes it new and interesting to me to watch,” she says. ”I have all the time and space in the world when I write a book. You’ve seen the size of them. There is no conceivable way that you could film book two from beginning to end. It would take probably 120 hours. Some fans would be into that, but in reality, good luck with finding a sponsor for that. Ron and his team have a limited number of 55-minute chunks, and each chunk has to have its own dramatic arc. Each has to have conflict and resolution and follow the traditional storytelling structure. The book is not arranged that way, and consequently they are going to have to rearrange the material and select certain bits while they lose others. The writers get together and brainstorm and usually it starts with Ron as the showrunner. Then the studio and the network get involved. When I am at home writing, I have all the power. I am God. But TV is a polytheistic universe.” 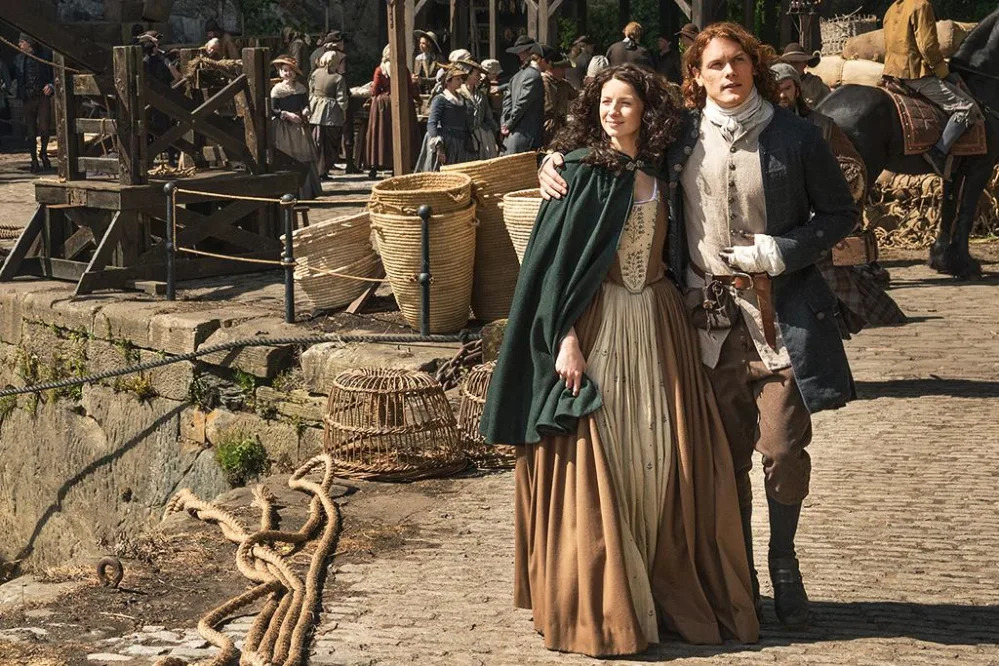 To recap, Season 2 started with Claire (Caitriona Balfe) coming back through the stones a few years after she left, grieving, distraught, pregnant, and wearing some very fancy vintage threads. Frank (Tobias Menzies) is confused, but elated to have his wife back. Things are a little harder to swallow once Claire comes clean about time-traveling to the 18th Century, finding and marrying her soulmate, and trying to alter history. Oh and by the way, she’s knocked up and would like to know if Frank will raise her ginger lovechild. Then it flashes back to show Jamie (Sam Heughan), Claire, and Murtaugh’s forays in France, trying to thwart the Jacobite rebellion.

Dragonfly In Amber, the second book in the soon-to-be nine-book series, however, begins in the 1960s. Claire has already been back in her era for years and that baby is all grown up and named Brianna.

“When we got those scripts from Ron, it was really exciting,” Balfe recalls. “It was a really bold storytelling move to, at the very front, be like, ‘Well, here’s where these characters are going to end up. And now, we’re going to tell you how that happened.’ It’s like any great episode of Columbo, which I loved. Technically it’s a spoiler, but to me it actually proves that it’s the telling, the journey that’s what’s important.”

It might also assuage some of the feels if you know why they made the changes they did. “I liked the beginning of the book, but I thought it was too much to give to the TV audience all at once,” Moore says. “The book starts in 1968, and that means Claire returned to the 20th Century, the battle of Culloden’s been lost, she left Jamie behind, and she brought the child forward [in time]. Also it’s 20 years later. She’s a doctor. Brianna’s an adult. Frank’s dead. That’s a lot of information, and I’ve only got 30 minutes because I’m not going to spend multiple episodes in 1968. So I thought, ‘Let’s start at the beginning of that story. It’s also shocking enough to return to the 20th Century apropos of nothing when fans are expecting France? And [it’s still a lot to process that she] goes to the 20th Century and, oh my god, they lost? It was all for naught? And holy s–t, she left Jamie behind? And a baby? Let’s just start with what did she say to Frank and how did that happen?’ You knew that had to be one hell of a conversation, so we started there so that when we do catch up to the 1968 story — and we will — and Brianna is around, you have some kind of foundation.”


Gabaldon adds that reworking it this way makes Frank a more sympathetic character. “Ron wanted to expend Frank’s role beyond a few pages in the book and show more of their marriage so that we understand why Claire keeps trying to get back to him in the beginning and why she tries to take measures to save his future existence. Plus, Tobias is such a good actor that they naturally want to give him more to do,“ she says. “You don’t feel the same sympathy for Frank in the book because it is all from Claire’s point of view and she’s got her own concerns. When she comes back, she feels very distanced from Frank. Her heart is still with Jamie, and she is having all the turmoil of pregnancy. It takes some time for her to come back a little bit into his orbit, so to speak. Frank is a great tragic figure. The way Claire’s re-entry in the 1940s is handled and how she comes clean about being in love with another man and carrying his child is heartbreaking. Frank rises to the occasion, so he is heroic in his own way. He’s just not Jamie.”

That kind of statement has always made Balfe feel sorry for the Frank character. “Readers of the books forever have been really down on Frank. They’re like, ‘He’s a cheater’ and ‘He’s this and that.’ Now, you understand how he became that way,” she says. “He put everything on the line and she shot him down. They then forged ahead with this unhappy marriage, [but there] was always someone else, a ghost, in their marriage. Can you blame the man for trying to find some happiness or solace elsewhere? This is the beauty of human interactions. It’s always complicated. People aren’t just good or bad.”

Heughan concurs. “It moves the Frank character forward. He’s charming in a slightly cold, English way in Season 1. In Season 2, you see what he’s been through. He’s aged. He’s really struggled [with Claire disappearing] and is now quite emotionally raw.”


It also plays into the Columbo-like mystery, Heughan says. “Ultimately, Claire’s left Jamie in the past and you wonder, ‘How did they get there? What has driven her to take her child back to the future?’” 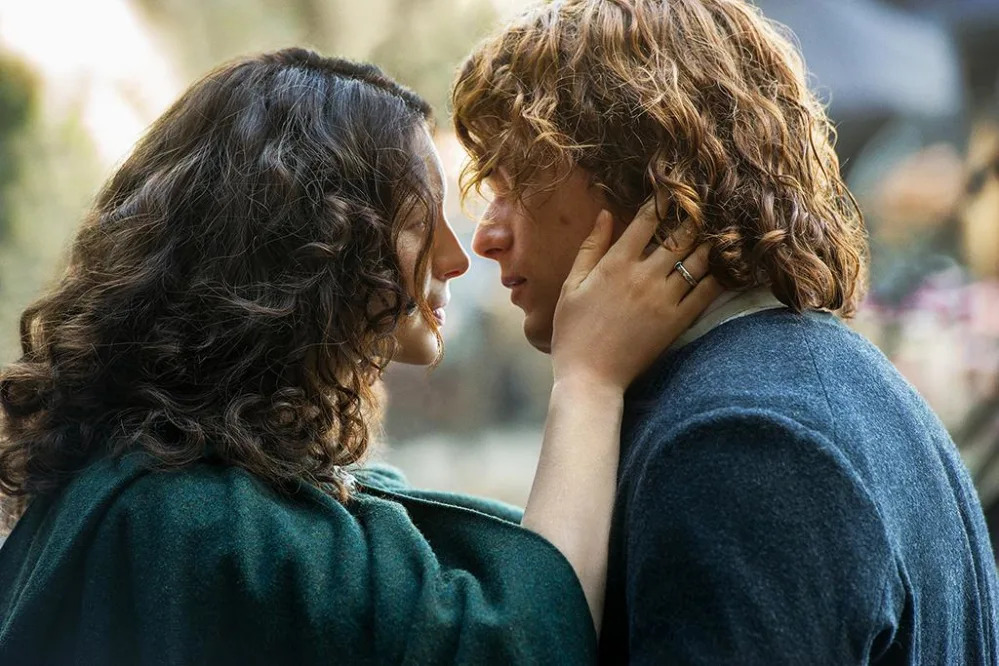 For Moore, the changes were also about proving that Frank was “worthy” of Claire. “I feel responsibility to make sure that he’s worthy of my heroine. Some fans get trapped into this idea that there’s Team Jamie and Team Frank. It’s not a competition. Jamie’s the soulmate, but she married Frank and made the choice to have him as a life partner in full consciousness. She wasn’t entrapped. She loved him and she’s going to return to the 20th Century, live with him in Boston, and let this man raise her child. So he has to be worthy of her,” Moore says. “If he’s not, I feel less about her. She’s not a fool to make this choice. I understand why she was torn in Season 1 and tried so hard to get back to him. I felt that was important to our story.”

Menzies agrees. “It makes for a very strong opening to the season. It’s a bit surprising, unexpected, a real punch of emotion seeing Frank and Claire salvage their marriage,” he says. “It gives an interesting undertone and texture to them [when we] see Jamie and Claire struggling with their relationship post-Wentworth.”

Not that all is well with Crank (Claire and Frank) either. “He wrestles with what he encounters. It’s not straightforward. He doesn’t just roll over and go, ‘It’s fine and welcome back.’ There’s some rage, frustrations, real disappointments and hurt there,” Menzies says. “We see the emotional impact of Claire’s journey on another person. [We see], you could argue, a great act of selfless love to take her back and raise the child as his own despite how much it hurt him. That’s a contrast to the romantic love that we see between Claire and Jamie. It’s a compromise — a different, but no less important type of love.”

This is a short article, the rest is at Tumblr address above.
Posted by Outlander Homepage at 8:44 AM