First things first, if you love Outlander as much as we do, then you've seen Episode 201 "Through the Glass, Darkly" at least once by now, & drawn your own conclusions about it. Each Sunday following a new episode, I will lead an open discussion about the show, how it connects with the books, and throw some "food for thought" out there for everyone to chew and chat over. We here at Outlander Homepage are avid book fans, having read them all numerous times, yet we try to curb the spoiler ratio for those followers who are strictly show fans. Sometimes though, it just can't be helped...

The very first thing that struck me while watching the episode was: The beauty and brilliance of Tobias Menzies' talent! I wanted to know if anyone else was rather pissed that the show made Frank "likable"? 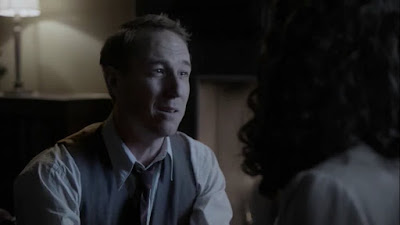 Both Team Jamie, and Team Frank weighed in, and even though there was plenty of sympathy for Frank Randall, he ain't got a snowballs chance in hell of ever manning up on par with our hunky Highland laddie. What did come out, and I found it very intriguing, was the number of viewers who noticed the subtle similarities between Frank's reaction to Claire's pregnancy, and his ancestor's vile penchant for violence. Here are a couple of tweets on that subject from last night: 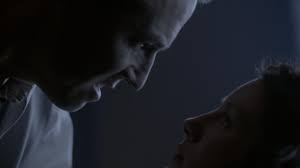 Delina Thriemer ‏@LinaDee03: "Thought same thing. Anger must be family trait. Remember the beating he gave the guy in season 1?

Anna Goodberlet ‏@annagoober: "Agree! When he made that fist, BJR right there!"

I really believe that Claire's knowledge of what a "twisted knicker" Frank's ancestor was, prevented her from ever seeing Frank as the same man she once loved. Yet, as it was pointed out by follower, Susan Saunders @sksaunders17 in last night's talk, that Frank was being selfish in his desire to make a family with Claire and raise a child, he didn't father, because he knew he was sterile. 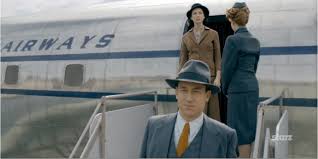 Therefore, his proposal with "conditions" was a form of blackmail.
At any rate, Frank did evoke a great deal of sympathy from those of us who did and/or still do think, he's a pompous prick. Even my sweetie, (who watches Outlander with me & willingly offers a man's view point/opinion of the show, and yes I am very lucky!) sums up the manly opinion of Frank as: "Nah, don't like him, dude's a dick." The All Things Outlander Top Tweet on this subject goes to:

Tobias's Tribe @TribeTobias "People who think one character has to be bad for another to be good are probably better off sticking with Disney." 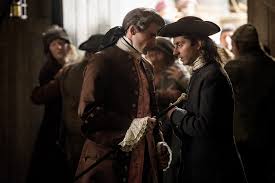 The next point of view is a recurring one for me in the show, and certainly in every single one of the novels, although by book nine, experience has taught Claire some caution. I wanted to know if anyone else wanted to slap Claire for not listening to Jamie at the docks, thus creating a very dangerous enemy for them both? 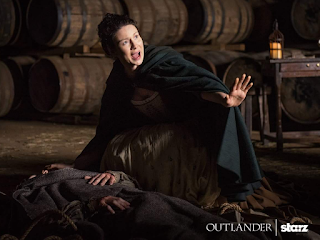 The general consensus was that yes, Claire's headstrong manner and penchant for ignoring the fact that she is two hundred years more advanced socially and medically than the world she shares with Jamie, is annoying. I have to give my girl:
BoolaBeulah @beulahcrusoe props for her sentiments on the subject: "BINGO! FOOKIN BINGO! she deliberately ran AWAY FROM Jamie calling her!!!"

There were a few who admire Claire for her determination to always do what she believes to be right, although it might cause a ruckus, and others simply chalk it up to Claire just being Claire. I suppose my irritation with her heedless behavior is my firm belief in: "when in Rome do as the Roman's do". I have a strong survivor mentality, and flying under the radar will likely help you stay alive longer than drawing attention to yourself. No matter how upsetting her rash actions, and their repercussions, might be, we all love Claire, but I think the ATO Top Tweet on this topic offers some sage advice for our sassenach from:

MyDogLooksLikeRankin @RikRankinDog "A hard head makes for a soft behind, Claire!"

Last but not least, the third and final tidbit up for perusal was aimed at the book/show fans, as I asked if anyone noticed the "ring" Claire finds in the grass was missing what was likely a large cabochon ruby? Well I was tickled plaid when quite a few of you were quick to acknowledge you too had noticed and were just popping with speculation, as to the significance of the scene in regard to future Outlander seasons. Naturally this turned to chatter towards the novels, how the use of gem stones was required for travelling through the stones, and as pointed out by:

Sassy Susie @2SassySusie: "I wondered about that ring. Clair never needed a gem to travel, I thought it was the pinky ring, but show/books are different."

Why is Claire able to time travel without the aid of gemstones? Is there any significance in the blackened looking ring missing it's stone that Claire scrambles to find in the grass? Is it a reference to be used in future seasons of Outlander? While there is plenty of fodder for conspiracy theories regarding that piece of jewelry, my final ATO pick for Top Tweet sums up mine, and certainly anyone else who has read Diana's entire book series sentiments, from:

Susan Saunders @sksaunders17: "These books are a testimony to love, relationships eternal. What we long 4."

What we've been longing for is more Outlander, and now that we have it, I think it's important to just step back for a moment, and take it all in. From the opening credits, and the Skye Boat song, sung in French, to the epic settings, scenery, and costuming that will only grow even more mesmerizing with each new episode, to the incredible acting, writing, and directing that provides us with our weekly All Things Outlander fix.

Remember to join me, Nancy McGehee Guillory (@NancyMGuillory) on Outlander HomePage @OutlanderHome every Sunday evening from 7pm-8pm Central Standard Time for an open discussion on that week's show and All Things Outlander.

Until then, Slainte Mhath!

Posted by Outlander Homepage at 2:49 PM