By Megan Vick of TV Guide 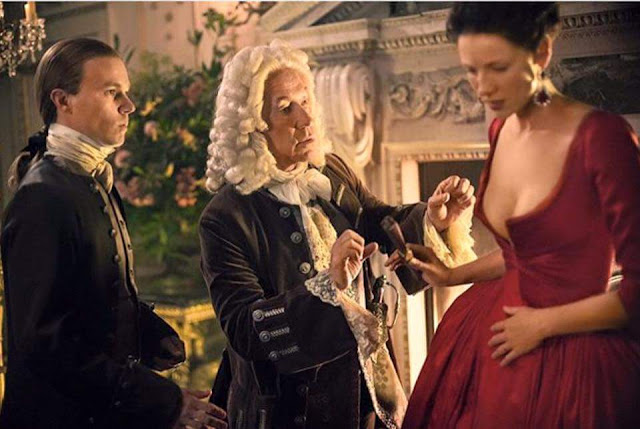 Claire (Caitriona Balfe) received the news from the Duke of Sandringham (Simon Callow), who has arrived in Paris to commune with his fellow Jacobites on Saturday's episode of Outlander. Not only is Black Jack still alive but also his younger brother Alex is serving as the Duke's secretary. Just as the Frasers are getting used to their new lives, their living nightmare has come back to haunt them.

However, Jamie (Sam Heughan) wasn't around to hear the gut-wrenching news. The Scottish laird still isn't sleeping due to his nightmares of Black Jack's torture and the twisted rape he endured while being held at Wentworth Prison. The wounds of the assault are still very fresh and it's possible that knowing that Randall is still alive would send Jamie off the edge in the middle of a very important game of political chess.


So now Claire has a very tough choice to make. It's a large secret for her to keep and a potentially unforgivable lie if Jamie were to ever find out that she knew without telling him. On the other hand, Jamie has quickly made it to the inner circle of Bonnie Prince Charlie (Andrew Gower), putting him right at the ear of the man he needs to stop from leading the Scottish rebellion. If Jamie were to abscond to Scotland to exact his revenge rather than continue the plan to save the Highlander way of life then everything they've worked for will be ruined, and Jamie would unlikely return alive from such a deadly mission.

Regardless of the danger, Jamie and Claire have always been at their best when they are honest with each other and Claire is putting their relationship at risk by keeping this information from him. As they continue to wade deeper into the French political waters they'll need to know that they can trust each other and Claire isn't holding up her end of the bargain. She should consider whether she'd forgive Jamie for keeping something of that magnitude from her if the situation were reversed. She'd know immediately that she wouldn't. As terrified as she is of what this information will do to Jamie, the prospect of what would happen to either of them if their relationship were damaged is a far scarier prospect.

Read more from the Amazing Megan Vick http://www.tvguide.com/search/?keyword=Outlander
Posted by Outlander Homepage at 8:35 AM