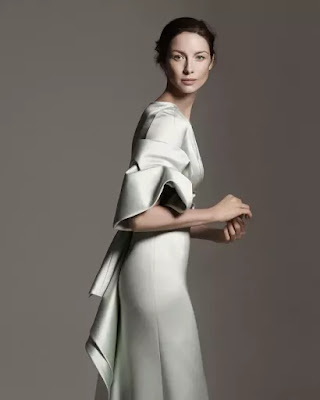 Caitriona Balfe Looks Back
The Irish actress on time travel and her upcoming film with George Clooney.

As a model, Caitriona Balfe was well accustomed to disrobing in front of a crowd. Now that she’s an actress, playing the unabashed Claire in the wildly popular Starz show Outlander, the 35-year-old has discovered she isn’t quite as adept at being naked as she would have liked to think. “It’s a very different beast,” the Dublin native says. “As an actress, you want to be brave and go as far as you can. But sometimes, afterward, you wish you hadn’t been as brave, like when you’re watching and thinking, Oh, God.”

Based on the best-selling novels by Diana Gabaldon, the series, currently shooting its second season, follows Claire, a former World War II nurse who time-travels from 1945 to 1743 in Scotland. In the midst of political unrest, she becomes entangled with a Highlander, all while trying to return to the 20th century. Balfe was doing Margaret Thatcher impressions by the age of 4 and went on to study theater. But when she was scouted by a modeling agent at 18, the promise of international travel proved hard topass up. She doesn’t regret the detour. “I didn’t have the life experience or maturity in my 20s to bring what I can now to acting,” she says. Her next role, opposite George Clooney inMoney Monster, is a PR exec for a financial company. “That was almost more alien to me than the time-traveling nurse,” she says with a laugh. “I was like, What do people do in offices all day?”


Finish the rest of the article at Wmag.com


Posted by Outlander Homepage at 10:40 AM