Outlander’ Season One, Volume Two Coming to DVD/Blu-ray in September 2016 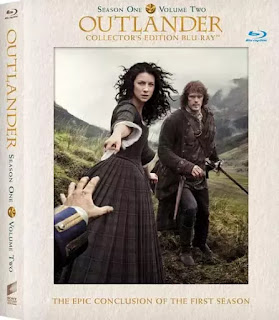 Season two of Outlander may not be coming to our screens until 2016, but the second half of season one will soon be available on Blu-ray and DVD. Outlander Season One, Volume Two is set for release on September 29, 2015. The set will include a gag reel, more bonus features to be announced. Below is the info for all three formats from Amazon.

Ronald D. Moore said there would be an alternate version of Episode 109 before it was reworked/re-edited.

There has been no information on when the Season 1B will be released on iTunes or digitally on Amazon. There has also been no news on the complete Season One becoming available all together.

Fans can now complete their Season One collection whenOUTLANDER: SEASON 1, VOLUME2 arrives Sept. 29 when a specially curated Limited Collector’s Edition will be released along with the Blu-ray and DVD from Sony Pictures Home Entertainment. In addition to all the special features included on the Blu-ray, The Limited Collector’s Edition boasts exclusive collectible packaging with 3D art, a 32-page book with photographs, excerpts from the script and an introduction from producer Ronald D. Moore.

The second half of the popular sci-fi adventure further explores the epic relationships of Claire Randall, a World War II nurse who inexplicably travels back in time to 18th Century Scotland, where she meets Jamie Fraser, a chivalrous Scottish warrior. Caitriona Balfe (Now You See Me) and Sam Heughan (A Princess for Christmas) head the cast of Starz’ breakout series based on Diana Gabaldon’s # 1 New York Times best-seller.

OUTLANDER: SEASON 1, VOLUME 2 contains all eight episodes and is loaded with special features including a gag reel, the Outlander Podcasts on every episode and an all-new featurette, “Weaving Authentic: Making the Fabrics of Outlander,” which provides insight into the significance of the fabrics used in the series and how they are made. Exclusive to the Blu-ray will be an extensive amount of additional bonus material including 15 deleted scenes and a unique extended cut of “The Reckoning,” almost 12 minutes longer than the final aired version. Utilizing unfinished deleted footage, Ronald D. Moore gives Outlander fans a look at an episode presented with both a longer script version of the show vs. the final edited cut after being trimmed for broadcast.

Outlander enthusiasts can also get the ultimate behind-the-scenes look into the show, with three new exclusive featurettes. In “Diana Gabaldon Tours Outlander” the author is able to see her words come to life as she tours the set for the first time. The “Outlander Cast & Crew Table Read” shows everyone coming together for table reads on two episodes entitled”The Way Out” and “The Gathering.” Lastly, “A Triangle in Time” features Sam Heughan, Caitriona Balfe and Tobias Menzies as they discuss the passionate yet complicated love triangle between Jamie, Claire and Frank.

Outlander spans the genres of romance, science fiction, history and adventure as it follows Claire Randall, a married WWII combat nurse who mistakenly falls back in time to 1743. As the season continues, Claire and Jamie’s relationship is tested and Claire must reconcile her modern mindset with this 18th Century world. Ruthless Redcoats, volatile clan politics and a brutal witch trial force Jamie and Claire to escape to a new home. Just when their life as a married couple begins to take shape, Jamie is once again drawn into Captain Randall’s darkness. Ultimately, Claire discovers there is a fate worse than death as she struggles to save Jamie’s heart, as well as his soul.

The Limited Collector’s Edition Blu-ray includes:
Exclusive collectible packaging with 3D art
A 32-page book with photographs, excerpts from the script and
an introduction from Ronald D. Moore
All the special features included on the Blu-ray noted below

Blu-ray Exclusive Special Features:
The Reckoning Extended Episode with Introduction by Ronald D. Moore
15 Deleted Scenes with Introductions by Ronald D. Moore
Three All-New Featurettes:
Diana Gabaldon Tours Outlander – Author Diana Gabaldon witnesses her words coming to life as she tours the sets of Outlander for the first time.
Outlander Cast & Crew Table Read – Join the cast and crew as they come together for table reads on episodes “The Way Out” & “The Gathering.”
A Triangle in Time – Sam Heughan, Caitriona Balfe and Tobias Menzies discuss the passionate yet complicated love triangle between Jamie, Claire and Frank.

Posted by Outlander Homepage at 8:17 AM