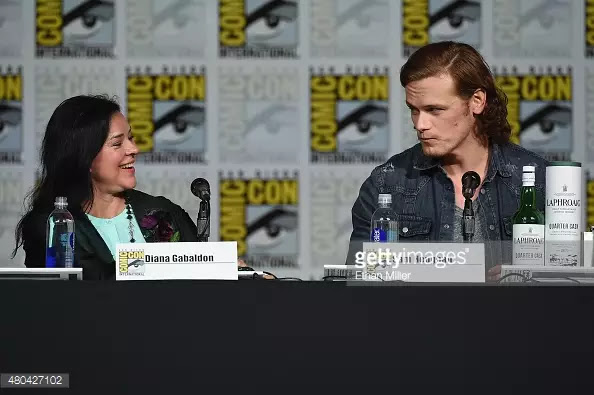 Diana Gabaldon has been asked in the past about whether she would be interested in writing a script for the television adaptation of Outlander. We asked her on the red carpet premiere last year at San Diego Comic Con (SDCC). She always seemed open to it, but she is the first to say that she is not a script writer. She has not worked in that medium. Yesterday at the Outlander SDCC panel, she confirmed that she will be writing a script for Season Two. Furthermore, on Facebook late last night, she revealed that she will be writing Episode 211 (the eleventh episode of the season).

“Another loooooong (but very good) day. Tons of press interviews of all kinds during the day, the Outlander panel at 4, and then a signing in the Random House booth, with all five panelists: me, Sam H., Caitriona, Ron and Maril. Had fun, met many nice people, had two lovely bagpipers show up to serenade us and pipe us out.
Two bits of news were revealed at the panel: 1) the on-sale date for the DVD of the second half of Season One is September 29, and 2) I’m writing one of the scripts for Season Two (it will be episode 211–I think I’m allowed to tell you that much…).”

Posted by Outlander Homepage at 8:21 AM