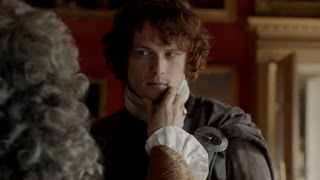 As many “Outlander” fans know, we are still in the thick of voting season. Ballots for Television Academy members are due on June 26, and we’ve had a chance this weekend to look over the full ballot. We always find it interesting to see where certain people are submitted, and it also gives you somewhat of a scope as to just how much fantastic television is being made in this golden age.

This year in the category of Lead Actor in a Drama Series, we genuinely reckon that there are 15-20 contenders who are all extremely worthy, and of course the majority of them will be snubbed when the nominees are announced come July 16. We hope that Sam Heughan is one of the fortunate ones, as he is on our personal dream ballot and gave a fantastic, heart-pounding performance throughout the 16-episode first season. Yet, we are aware that Emmy voters can be at times an unpredictable bunch, and while you often can look at other awards shows and the internet to predict their next move, they can still come out and surprise you. The only person we roughly consider a lock for a nomination this year is Jon Hamm, given that it is the final season of “Mad Men” and he has been shut out of a trophy to date. Since we’ve already given you a full interview with Sam regarding his Emmy campaign, we’re not going to focus too much more on that other than to remind you that if you are voting in our own Emmy series, we’re going to announce full results of that on July 15. This will be a fun way to compare the preferences of the CarterMatt readership against what the Academy decides the following day; we’ve received hundreds of thousands of votes across all categories, and we have thoroughly enjoyed reading the feedback!

What we wanted to share with you tonight was a quick quote from Sam in another Emmy-centric interview he did recently with TheWrap, since it gives you a little bit of a sense as to the scope of the upcoming second season. Production is currently underway in Scotland, which will be doubling for Jamie and Claire’s new destination in France. There have been many castings reported as of late, which presents the series with a pretty remarkable sense of old-and-new flair given that you have many familiar cast and crew members.
Here is what Heughan said when prompted about whether or not there are specifically notable scenes that have been filmed so far:
“We were shooting up on the East Coast of Scotland, which doubled for the French sea court, and it’s pretty much the opening of the show in Season 2. There’s some incredible location work, we had lots of boats there and the French harbor… We’ve got some terrific French cast, lots of French actors, some quite famous, are in the show. It just feels very different. It feels like an epic sort of journey that we’re on,on the show. It’s such n interesting time period too. The end of 1744, 1745, so it’s a really interesting time, we’re so close to revolution. Yeah, it’s been great.”

We know that production is getting close to finishing the first three episodes, and work will continue throughout the year before premiering on Starz at some point in 2016. Once there are more concrete details on either the show or the Emmys, we will have them for you here.
Also, be sure to sign up if curious in getting some other TV updates on everything we cover, sent right to you via our CarterMatt Newsletter. (Photo: Starz.)
Posted by Outlander Homepage at 12:49 PM