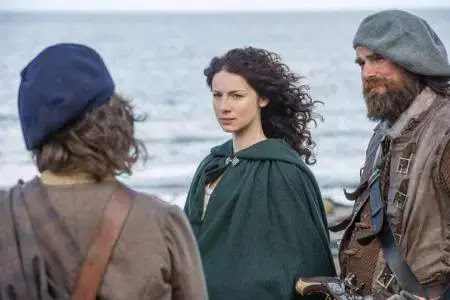 We have not seen too many stories out there on the return of Frank Randall to “Outlander” this coming season, and that to us is somewhat saddening. It doesn’t take away from our love of Jamie and Claire, but this was such a key portion of the show’s pilot, and we have also been away from the character for so long. Plus we are always going to love getting a chance to celebrate more of Tobias Menzies onscreen, especially since it’s going to be rather difficult to see him as Black Jack after the events of the season 1 finale.

While San Diego Comic-Con took place a little while ago, Caitriona Balfe did an interview with “Access Hollywood” that was just published, one where she spoke a little about getting to dive back  into this world a little bit:

“We did some stuff back in the ’40s and it’s beautiful. Ron [D. Moore] wrote that stuff, and yeah, I think Tobias and I just really — I don’t think either of us felt that we’d had such great material … It’s just fantastic. It’s fantastic stuff to play.”

Will this be a flashback to an earlier time before Claire was transported to Scotland? Given what we know about the series and the way to transport between the worlds, this is the prevailing theory. However, at the same exact time there may be many more hints that allow book readers to have a better sense as to what lies ahead specifically.

For those curious, Balfe went on to describe how Claire’s pregnancy is going to prove to be a key element in the story that comes ahead for the character in France:

“It changes everything … When you kind of believe that something is impossible and then that changes… it brings up a lot of stuff about her own family and her past. She lost her parents when she was 5, so she’s never really had that kind of mother figure there to guide her, and I think it brings up a lot of that stuff for her, but it’s something that brings Jamie and Claire really together, and it’s a beautiful part of the story.”
Posted by Outlander Homepage at 10:38 PM