Cartermatt.com has some interesting takes on Outlander Comic con panel this year. Will there be footage for season 2? Let's hope. 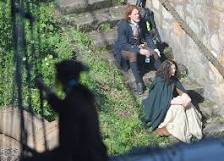 This week is turning out to be a big one for lovers of almost anything and everything related to television. It’s Comic-Con! Sure, not every show is going to be there, but this convention has become such a hub of multiple different genre that many of your favorites will be making their presence felt in a rather big way. This includes “Outlander,” and we wanted to get together a small prime of sorts to get you prepared for when the panel happens on Saturday.

Attending – Showrunner Ronald D. Moore, series author Diana Gabaldon, and stars Sam Hueghan and Caitriona Balfe will be turning up. It’s hard to speculate really on anyone else, given that the move for Jamie and Claire from Scotland to France means that many characters from season 1 may not be turning up on the show. (Note: We deliberately are staying clear of book spoilers to stay unbiased on the show, so we’re just speculating based mostly on logic.)

Will there be a trailer? – It’s possible that there will be some sort of teaser for the second season, given that filming has been underway for several weeks now and it has become a Comic-Con tradition to put together something when it comes to video footage. Given the passion of “Outlander” fans, even thirty seconds could be enough to send the fandom into a tizzy. However, remember that we are still early in the Droughtlander. We don’t really think the focus of this panel is going to be showing off new footage.

Read more at the Source: ‘Outlander’ season 2: What to expect at Comic-Con panel | CarterMatt.com
Posted by Outlander Homepage at 9:06 AM