Outlander's Historical Landmarks in Scotland
Why tour Scotland? Here's Why

OUTLANDER author Diana Gabaldon and stars of the TV adaptation insist there is no doubt that Scotland plays a starring role in the show.

THE Outlander phenomenon has seen fans flock to Scotland to take in the locations featured in the show.

The success of Diana Gabaldon 's eight book series and the hit TV adaptation has boosted Scottish tourism and spawned an industry of location-inspired tours.

Some book location tours have been running for years while many other companies have added Outlander slants to existing tours based on film locations.

The hit show was filmed across various locations in Scotland, including a one-month stint at Doune Castle.

Linlithgow Palace, in the Scottish town of West Lothian, was also used to stand in for the entrance and corridors of Wentworth Prison .

And Outlander author Diana Gabaldon is a patron of Castle Leod, near Strathpeffer, and has used it as a fictional location - Castle Leoch - in her best-selling series of books.

Glasgow's iconic landmark, George Square, also played a key role after it was turned into a 1940s set during the show's first season.

Diana Gabaldon said: “The photography is amazing, not that Scotland by itself isn’t amazing, but the way they’ve photographed it. Ron (Moore, the producer) said from the beginning when he realised that we could film in Scotland – which is what he and I both wanted – that it must be as much a character in the show as any of the actual cast members, and it certainly is. It’s just spectacular.” 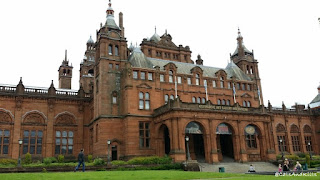 Picture by Catsandkilts
Posted by Outlander Homepage at 9:34 PM