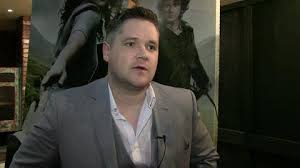 It took some convincing (and the young Willie to volunteer first), but Rupert MacKenzie is in on the plan to help Claire and Murtagh rescue Jamie on "Outlander."
"I think it speaks of the evolved loyalty, I guess, that they have towards them or the affection that they have towards them that they would do that," Grant O'Rourke, who plays Rupert, told Access Hollywood of Rupert and Angus agreeing to put their lives on the line to help.
In the Starz series, Rupert is a fierce Highlander, but one with a wit that's brought an enjoyable levity to the serious drama, and Grant has that sense of humor in common with his character.
Rupert just enjoys what he enjoys in life and doesn't let things stand in the way of him getting them, I guess, if he can," Grant said. "So even if it's a, 'That's what she said,' joke, that's what we do. I think I'm very similar to him, we just live in different ages."
A few hours ahead of one of his performances on stage in "The Venetian Twins" at the Royal Lyceum Theatre in Edinburgh, Scotland, recently, Grant spoke with Access Hollywood about his "Outlander" Season 1 experience, working with Stephen Walters, who plays Angus, and why his character said yes to joining Claire on the courageous, life or death mission to try and save Jamie Fraser from Wentworth Prison.

Posted by Outlander Homepage at 5:48 PM