A hint about Diana Gabaldon’s episode 11 by IBT

For the rest of the article 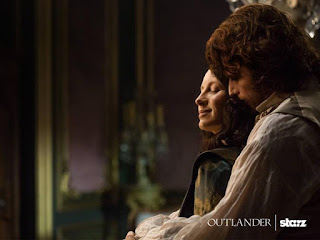 The script of episode 11 of “Outlander” Season 2 has been written by celebrity author Diana Gabaldon, on whose books the Starz TV series is based. In a recent interview cast members Sam Heughan and Caitriona Balfe talked about what it was like for them to act out the scenes while the author was writing in front of them.


Heughan (Jamie) and Balfe (Claire) visited The Envelope’s video studio and spoke about the episode written by Gabaldon, Los Angeles Times reports. Heughan said that when they did the read-through of the script they were all “delighted.”


“It read really well, there’s a great pace to it. It’s coming up soon,” the actor teased. However, Heughan also said that it felt “weird” to be playing his role while Gabaldon was writing the scenes right there in front of him. The two cast members and the author appear to have had a lot of fun finalising the script together.


“It was funny,” Balfe said. The actress said that while Gabaldon was writing the script for “Outlander” Season 2, she would go into “ this imaginary world where she’s sort of talking to herself and seeing it play out.” The author would then proceed to start writing the scene, after seeing it in her mind.


“It’s amazing to watch somebody go through that process,” Balfe said. The two cast members also got a taste of the next season of the TV series. Gabaldon has apparently read the script of the first episode of Season 3 and she is “really happy and excited,” Heughan teased.


Just four episodes are left in “Outlander” Season 2. Given the big scale of the production, ground work for the next season has already begun. The TV series has won particular praise for paying attention to minute details in both the sets as well as costumes in both the first and the second season.

From The Los Angeles Times:

Diana Gabaldon, author of the popular time-traveling book series “Outlander,” has been racking up her credits on the popular Starz drama that is based on her novels.

Gabaldon is a consultant on the drama about a WWII combat nurse (Caitriona Balfe) who travels from 1945 to 1743, where she falls for and marries Scotsman Jamie Fraser (Sam Heughan). But she’s also made a cameo appearance in Season 1 of the series. And coming up this season is an episode she wrote.

Heughan and Balfe said they were thrilled when they heard she would be writing a script for Season 2.

Go to site for the rest of this article
Posted by Outlander Homepage at 8:19 AM