For this full article and episode 2 11 recap
http://blogs.wsj.com/speakeasy/2016/06/18/outlander-actor-duncan-lacroix-on-murtaghs-head-y-moment/


'In many ways, he’s quite an easy character to play – there’s not a lot of subtext going on with Murtagh,' says Lacroix 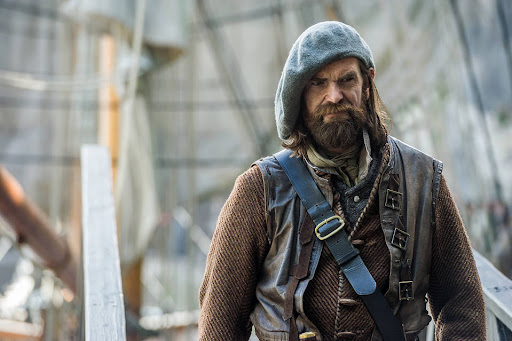 Warning: This article contains major spoilers from tonight’s episode of “Outlander,” “Vengeance Is Mine”

Wherever Jamie Fraser (Sam Heughan) goes, his godfather, Murtagh Fitzgibbons Fraser, is never far behind. As the only Highlander to accompany Jamie and his wife, Claire (Caitriona Balfe), on their Parisian adventure during this season of “Outlander,” the strong and silent supporting character continues to establish himself as an indispensable confidant to the Frasers.

Now that the action has switched back to Scotland, Murtagh may be more comfortable having ditched his frilly French finery for the familiar garb of kilts and wools, but the stakes of maintaining Claire and Jamie’s safety are higher than ever before. However, in the final minutes of tonight’s episode, Murtagh proved himself once again to be the Frasers’ fiercest protector, fulfilling his vow to seek retribution from the person responsible for attacking Claire andMary Hawkins in a Paris alley.

As it turns out, it wasn’t Le Comte St. Germain, as previously suspected, but the shifty Duke of Sandringham (Simon Callow) who ordered the assault. The duke’s surprise reappearance in this episode, “Vengeance Is Mine,” ended in a dramatic fashion rather fitting for the foppish, scheming nobleman: Murtagh brutally decapitated him.

“Vengeance Is Mine” was also a monumental episode for everyone involved in the Starz series, because it was written by Diana Gabaldon, author of the “Outlander” novels.


Duncan Lacroix, who portrays Murtagh on the show, phoned Speakeasy recently to chat about tonight’s critical development for his character. The British actor, who laughs almost as much as Murtagh broods, was calling from an unusually warm Glasgow, where production on “Outlander” is based. “I fell in love with the place, so I’ve stayed. It’s now my home,” he tells Speakeasy (“Outlander” has wrapped on season 2). “I’m actually enjoying the first, like, hot summer over here in about 100 years. People in Glasgow are wearing shorts for the first time in the last millennium [laughs].”

Below is an edited transcript of the conversation.

This most recent episode, “Vengeance Is Mine,” was penned by Diana Gabaldon. Was that intimidating – or was it like getting the new Harry Potter book?

Not really intimidating, because we all got to know Diana in season 1 – she popped by the studio a couple of times. So when we got the script it was just incredible – great script. It was just business as usual, really. And it was great to have her there on set as well.

Murtagh’s big moment in the episode is, of course, when he beheads the Duke of Sandringham with an axe. So what did you get to hack into instead of Simon Callow?

[Laughs] Almost Simon Callow himself, actually! It’s one of those things where I really had to get into the mode. And, of course, Simon’s such an amazing actor, someone I’ve followed for years. I usually do get intimidated more by famous actors than anything else, so I had to block that out. We went over it and over it again, and I was prodding around with the axe, and then we had this fantastic prosthetic head – and [Simon] kind of went flying backwards onto this mattress and I was hacking away into mid-air. But, yeah, there was lots of prosthetic blood being sprayed in my face – it was all very meaty. 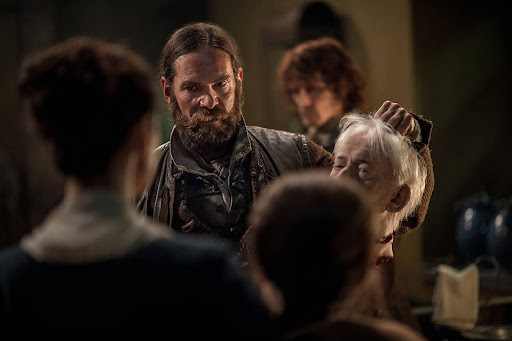 
Do those kinds of scenes freak you out – or are they just great fun?

I try to tap into the kind of whirling frustrations all the way through. Murtagh blames himself for the rape of Mary Hawkins in the alley, and up until that point, he never really gets to stamp his own actions upon things, to take command of a situation. So at that moment, I just chose that Murtagh was breaking out all of the frustrations, all the rage, all the things that have happened to Jamie, and that have happened to Claire. You can pinpoint it at this one moment on this one character. So yeah, you’ve got to go to a dark place with those things to pull them off.

What do you do to get to a place like that?

[I listen to] lots of dark music, like hip-hop. N.W.A, actually. That kind of thing.

Also, we did do a few takes where Murtagh gives a preamble to Sandringham in Gaelic. I think it was removed from the actual final cut (Editor’s note: It was), but that really helped. Because Gaelic is such a guttural language – it almost sounds like Klingon sometimes – so that helped as a platform to launch me into the scene. Perhaps one day you’ll see it in the director’s cut.

Did you get to keep the duke’s fake head as a souvenir?

[Laughs] No, I don’t know what happened to that thing. Somewhere there’s Simon Callow’s head in a box. They should be giving it to him, really.

Is there anything about Murtagh that was brought into the TV series – that wasn’t in the books – that you feel helped you understand the character better?

It was strange, really. We all at the outset didn’t really know too much about ["Outlander"], when we were all hired. It was a big catch-up reading the books – and I was cast before I read them. In the books, he doesn’t say an awful lot – not a lot of dialogue that you could transcribe to the actual screenplays. So it was something that built organically, which was good for me, because I hadn’t had that much experience in TV before. I had to get into my rhythm, and as the episodes went on, they started writing more and more for Murtagh. They knew in season 2 he was the only principal character other than Jamie and Claire that would be in France, so we had to establish him towards the end of season 1. It started with the episode “The Search.” In many ways he’s quite an easy character to play – there’s not a lot of subtext going on with Murtagh. He says what he thinks, he says what he feels. His through line is pretty clear: to protect Jamie and Claire at all costs. 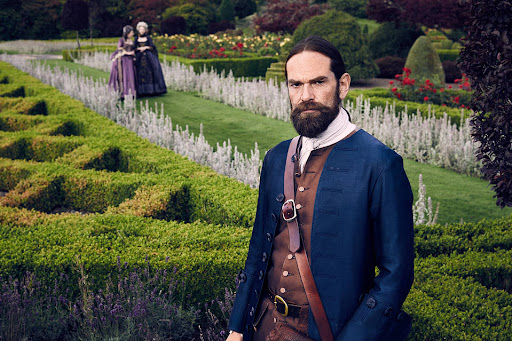 
How do you feel about Murtagh being a source of comic relief – though it’s not all the time. Is that something that was intended from the scripts, or is that coming from you? There’s always the talk of the eyebrow acting…

[Laughs] Yeah, my now-famous eyebrows, God help me. I think it’s a bit of both. During season 1, [the writers] picked up on my sense of humor, and started writing a bit more for that. And, you haven’t got Rupert and Angus in Paris. You haven’t got that core set of Highlanders, and they provide a lot of the comic relief – which I think is really important in a drama like this. So Murtagh got to represent the Highlanders en masse in France.

Since you’ve finished shooting – have you lost the Murtagh beard? I think I saw some recent photos of you.

I have. [Laughs] I had it for about three years, so I was curious to see what my face looked like.

I also saw your tweet about watching “Outlander” with your parents. Was it fun? Or awkward?

It was real fun. The sex scenes are always quite awkward. It’s reminiscent of the times when you’re about 13 or 14 and suddenly a sex scene comes on when you’re watching something with your parents and then everything just goes quiet. [Laughs] Stony silence. But I was absolutely amazed at how much they loved the show. My mom was like a crack addict with it. And anything that my dad doesn’t doze off in is usually a good sign.

You and Caitriona Balfe have been able to share some really poignant scenes together. Last year, there was the one where Murtagh tells Claire about his history with Jamie’s mom. This season, he learns her secret – she’s from the future. What do you enjoy the most about those kinds of scenes?

The solo scenes I either have with Cait or Sam tend to be my favorite scenes. It’s one of those natural-chemistry things, I think. It feels like family at this point, so those things are very easy. And they have a nice, gentle pace to it. Also, I like the fact that it’s almost counter-intuitive sometimes, Murtagh’s reactions to Claire. You expect the gruff, “What the hell is going on?” [reaction]. But he’s very, very sympathetic to Claire. And I love that side about him. Once he accepts something, he accepts it. 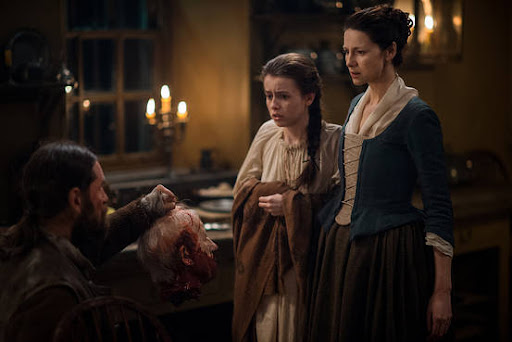 
A couple of episodes ago we saw Murtagh whipping a ragtag group of Highland soldiers into shape. How would you fare under a Murtagh-run boot camp?

Oh, my God – not very well. I’ve been trying to get to the same gym as Sam, and they’re quite tough taskmasters. It’s not my cup of tea, really. All that screaming in your ear. I think I would’ve deserted on the first day.

Is there anything you can tease about the 90-minute season finale?

I haven’t actually seen it, but I know people who have, and I’m assured that, if you think Caitriona’s performances so far have been amazing? Well, it’s going to be an absolutely devastating performance. It’s going to be epic, as well as feature-length, and extremely emotional.

Posted by Outlander Homepage at 8:47 AM