Outlander Secrets, Part 11: The Costume Detail No One Notices

In the latest installment of ​Outlander ​Secrets, costume designer Terry Dresbach reveals just how much time goes into perfecting things we rarely even see. 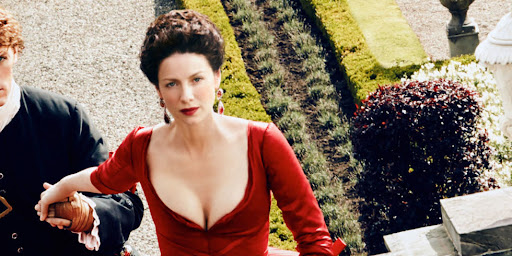 Terry Dresbach talks a lot about the jaw-droppingly gorgeous, Emmy-winning costumes she crafts for the Starz megahit Outlander: the swan dress, the kilts, the Dior-inspired dress. But she doesn't often get to wax poetic about the show's shoes.

"The shoes are something I've been really really wanting to talk about, because they're pretty spectacular," Dresbach says. Here, we give her the floor to do just that. When you consider just how much time goes into every single detail of the show's wardrobe—even the things we don't usually see!—it's truly mind-boggling. 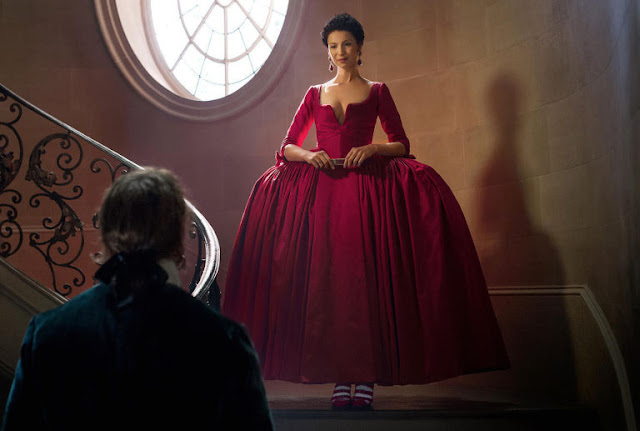 "It works like this: There are the custom shoes I design for Caitriona Balfe [who plays Claire Fraser] that we had custom made, and there are the ones we make for our supporting cast, and then there's the insane process of making shoes for thousands of extras. There are a lot of '90s mules that have been repurposed. We've become masters of taking all sorts of odd shoes that we see on eBay and turning them inside out, taping them, putting ribbons and bows and glitter all over them, and suddenly we have 18th century shoes. It's quite fascinating to watch.
TERRY DRESBACH

This season, we bought a lot of wedding shoes. Wedding shoes are a great resource. You know the 'dye-your-own' kind? Where it's made to match the bouquet? We bought those and then we dye them. We start out by having them all dyed, then the next team comes in and paints them with stencils, and then the next team puts on the bows and the embellishments. We have boxes and boxes and boxes of very elaborate shoes that just started out as bad '80s wedding shoes.
"THERE ARE SHOES, AND THERE ARE SHOES":

Ahh, the red shoes! You know, there are shoes and there are shoes. Those are shoes, and that is not part of the mass production. That is me taking advantage of the opportunity, for the first time in my career, to say, 'Well, we'd obviously have to design these shoes. We can't just go buy them.' 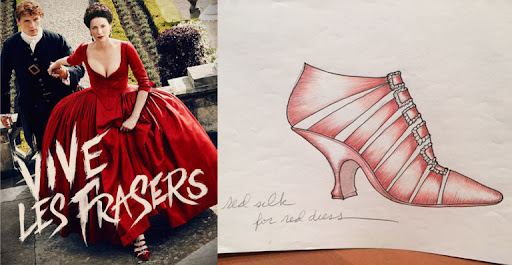 A PROMOTIONAL IMAGE FOR THE SHOW, WHERE THE SHOES GET A CHANCE TO SHINE, AND A SKETCH OF THE SHOE BY DRESBACH


But it was fascinating process because I took actual 18th century shoes and just changed them a little bit. What I wanted to sell was the idea—like I have on so much of this show—that you really don't have to reinvent history to make it fantastic, beautiful, sexy, glamorous. We've been revisiting the 18th century on the runway since Dior did it in the '40s. Lagerfeld, Vivienne Westwood, Dior, Chanel, Marc Jacobs…is there a season where we're not going back to the 18th century?

In the end the red shoes turned out wonderful. But I absolutely love all Claire's shoes, like the ones she wears the Dior bar suit. For that I sort of did a riff on the black lace shoe with the pom pom on it that Dior did with that costume. She's wearing 1940s Dior-inspired shoes as well, but you can't see them. 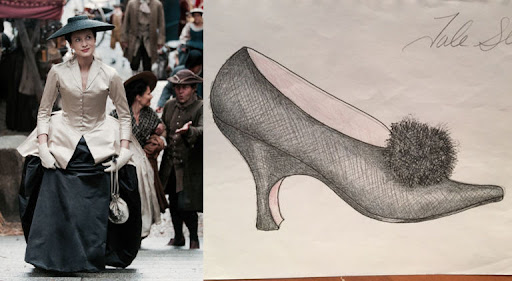 CLAIRE IN DRESBACH'S VERSION OF THE DIOR BAR SUIT, AND A SKETCH OF THE SHOE WORN WITH IT


I wish I could make all Claire's skirts all much much shorter so we could see them! It's all about whether or not they actually shoot them on camera. I'm always yelling at my husband [Outlander showrunner Ronald D. Moore], 'You never see their shoes!' and he's all like, 'Last week you were yelling at me about the back of their dress, and now this week, it's shoes.' And it's like, 'But do you know that we made those shoes? They're beautiful; you need more shoe shots.'"
We agree!

Posted by Outlander Homepage at 9:20 AM