‘Outlander’ Recap: Caitriona Balfe, Sam Heughan on the Bloody Reveals of ‘Vengeance is Mine’ 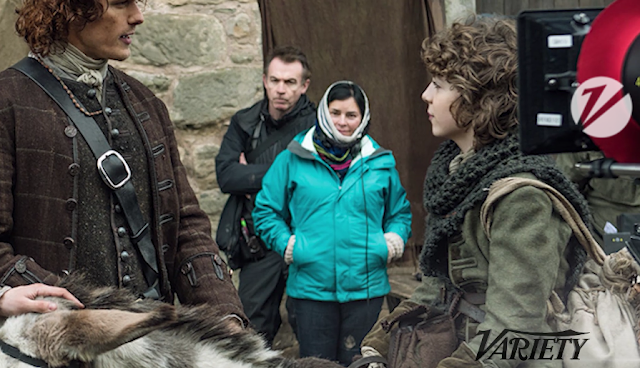 Spoiler warning: Do not read on unless you’ve seen “Outlander” Season 2, Episode 11, titled “Vengeance is Mine.” Refresh your memory with last week’s “Outlander” recap.


As the Battle of Culloden looms ever closer, this week’s “Outlander” sees Claire and Jamie’s lives spinning even further out of their control — first ambushed and besieged by the Redcoats, they then find themselves forced to separate to protect their men, which leads Claire to an unexpected confrontation with the duplicitous Duke of Sandringham, who is revealed to be the architect of Claire’s attack and Mary’s brutal rape in the streets of Paris. Not only does the episode feature the welcome return of Jamie’s mute friend Hugh Munro, it also allows Mary and Murtagh to exact their revenge on the men responsible for that heinous crime, offering some semblance of closure for what transpired in France.

Beyond featuring the death of a major character and pulling off several epic action scenes, the episode has special significance to stars Caitriona Balfe and Sam Heughan, since it was written by “Outlander” author Diana Gabaldon — who was also on set during filming.


“It’s so funny, because each writer has such a distinctive voice when they write — even if they took away the title page, you’d be able to hear ‘that’s an Ira script, that’s a Matt script,'” Balfe says. “And with this, it just felt like reading the source material again; it was so distinctively Diana that it was such a beautiful read and had such great action and pace to it. Claire’s so feisty; it’s the very distinctive Claire from the book, and it was really exciting to be able to do.”

Some time has passed since the Scots’ victory at Prestonpans, and we see that “Jamie’s been constantly battling with all the other commanders; there’s a lot of in-fighting — too many people with too many opinions, too much tradition,” Heughan notes in Variety‘s video recap above. “Jamie knows that if they fight like they have done for hundreds of years using the Highland charge, that won’t be effective against a modern army, so Jamie’s trying to modernize this army to at least give them a chance. Jamie definitely feels like he has a lot of weight on his shoulders now and ultimately, he begins to concern himself with the things he can protect — his men and the people that are close to him.”

That makes him reluctant to allow Claire to hand herself over to the Redcoats in order to secure safe passage for the rest of their troops — but our heroine is determined to do her part to ensure their freedom.

“I loved that Diana wrote that. Claire feels as much a part of this clan as any of them, and she does share that responsibility with Jamie,” Balfe says. “It’s a great line: ‘Am I not Lady Broch Tuarach? Are these not my men too?’ Because we’re back in Scotland, you can’t help but think back to last season and different times of when she felt so left out and it took such a long time for them to accept her and for her to accept them. It’s so great that now you see the unity of them all. She is one of them; she’s now a true Scot in many ways, and yet you see her use her Englishness to be able to protect them more – it’s the one card that she keeps having.”

It’s a fraught situation — one of many they’ll face before Culloden, Balfe previews. “They’re very desperate at this point, they don’t have a lot of options left. Claire and Jamie both know what’s looming, and I think that once you’re aware of that and you have that hanging over your head, it makes you act in very desperate ways, because you’re just reaching for anything, you’re trying to do anything that will help you survive.”

Heughan agrees, “It becomes quite frantic and quite desperate, but actually Jamie goes the other way, he doesn’t become desperate, he becomes very in control, very logical … before he might’ve been very passionate and very out of control, but now he’s a grown man and a grown leader of men.”

After his rape and torture at the hands of Black Jack last season, Heughan purposefully wanted to show that Jamie was a changed man, and that his sense of self-worth was affected by the lies and manipulation required of him in Paris as he tried to earn the trust of Bonny Prince Charlie. “I was very aware and nervous about the first half, about playing him as not the Jamie that we know and love and not as sparkly, not being quite present,” he admits. “I was slightly concerned that maybe the viewers wouldn’t get that or they’d be switched off by it, but I think it’s important to see that that has affected his relationship with Claire and that their relationship isn’t working, it’s a long process to get back to each other, which takes almost the whole season.” Now that he’s back in Scotland and has the lives of his men in his hands, however, “hopefully by the end of the season he’s in control of his destiny,” Heughan says.Balfe recalls reading a fan comment that asked, “if they know what’s going to happen, why do they keep fighting,” to which she responds, “They don’t have any other option; otherwise you just lay down and die. They have to fight to the end and I think it’s so indicative of their spirit, the fact that they’re just relentless, they’ll keep fighting and keep trying right ’til the end.”The death of Sandringham may not affect the outcome of Culloden, but it’s a personal victory that is sorely needed before they face their fates on the infamous moor. Balfe offers some insight into what’s going through Claire’s mind when she discovers Sandringham’s involvement in the Paris attack: “Sheer rage, it’s seething rage. More for Mary Hawkins than for Claire. It’s just that disgust. It’s always been this very slippery relationship between them anyway, and I think time and time again Claire, against her better instincts, has had to make alliances with him or somehow be involved with him, but I think she’s always known that this man is more devious than he appears, and to find out that he orchestrated that attack, and for his own goddaughter, it disgusts her. But I loved that Mary Hawkins finally gets justice and she gets it by her own hand, and Rosie Day did such an incredible job.”

The cast was reluctant to say goodbye to Simon Callow, who has endowed the Duke with such sly wit and perfidiousness, he’s fast become one of the most memorable characters on the show.

“It was very funny because poor Mary, every time she would come into the room, Simon would just turn round and be like ‘Just go to bed!’ and it became the catchphrase for the rest of the season among all the actors,” Balfe recalls with a laugh. “We’d just say ‘oh, just go to bed!’ And the prosthetic head, it was so wonderful and lifelike and I have a wonderful photo I can’t wait to tweet out once this episode has aired, of Simon holding it by its face.”

The only downside of Sandringham’s eventful death scene was that there wasn’t enough time to include every brutal moment that was written, including a powerful performance by Duncan Lacroix as Murtagh.

“Before going into battle, the warriors would announce their fathers and forefathers and conjure up the spirits of their past fathers,” Heughan says. “When shooting it, Duncan Lacroix did this beautiful speech in Gaelic – unfortunately it didn’t quite make it into the cut, but it was a really special moment.”

“Duncan is fantastic in that,” Balfe agrees. “It was really dramatic and I think Duncan probably terrified Simon because he was in the zone all day and off listening to music and would just come in…”

The bloody decapitation (and Mary and Claire’s priceless reaction to it) certainly ended the episode with a bang, Balfe notes: “It was a very fitting sendoff to a very colorful character that we’ve had since very early on in Season 1.”

“Outlander” airs Saturdays at 9 p.m. on Starz. What did you think of “Vengeance is Mine” and seeing Sandringham dead at Murtagh’s hand?

Posted by Outlander Homepage at 8:11 AM