Some excerpts of what's ahead, or go directly to the site
http://www.goldderby.com/article/2016/caitriona-balfe-outlander-interview-news-sam-heughan-3157908264/ 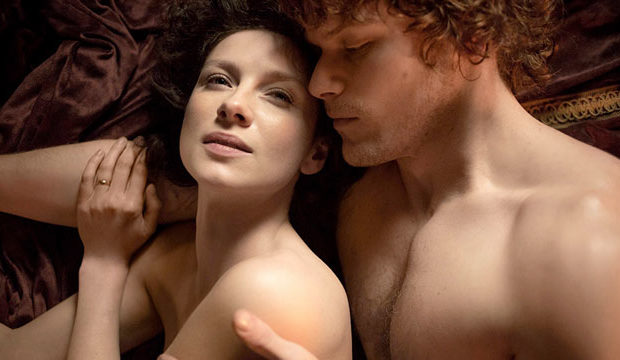 It killed me,” Caitriona Balfe tells Gold Derby (watch video below) when she learned that her “Outlander” character would lose her baby in a miscarriage. “Claire so much wanted to be a mother, but to have it all unravel in the worst way – it was heartbreaking. Even now I get goosebumps just thinking about it because I don’t think there’s anything that will ever compare … to the love of a mother and child.”

The scene in the episode (“Faith”) that impacted Balfe most profoundly was when Claire sang to the dead baby in her arms. “It’s a summer song I used to sing with my parents in the car when I was three or four,” she adds, recalling the haunting lyric, “”I do like to be beside the seaside.”

The harrowing scene had a “cathartic” effect on people who’d suffered a similar loss. After the episode aired, Balfe notes, “A lot of people reached out to me to say they’d been affected by it.”

In our webcam chat, Balfe also discusses other highlights from season two of “Outlander” so far: Claire being transported back to the 1940s (“Through a Glass, Darkly” episode), encountering Black Jack Randall (Tobias Menzies) with Jamie (Sam Heughan) in 18th century France (“Untimely Resurrection”) and experiencing frequent flashbacks to the Second World War (“Je Suis Prest” and other episodes).


Balfe says she’s “blown away” by the fact that “Outlander” is “a woman’s story and you see it through her eyes. She doesn’t change. She doesn’t back down and she doesn’t hide her opinions. I love that. She doesn’t really have to pay a price for being the woman that she is.”

Posted by Outlander Homepage at 7:22 AM