Diana Gabaldon on Why Outlander Isn’t Really a Romance and Writing
Her First Episode.


By Jennifer Vineyard of The Vulture

For the full article and other Outlander writings:
http://www.vulture.com/2016/06/diana-gabaldon-outlander-isnt-really-a-romance.html 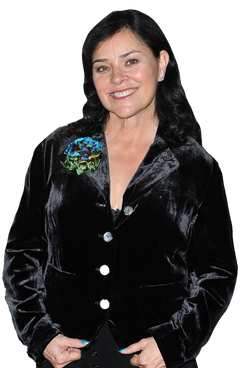 Spoilers ahead for the most recent episode of Outlander.

Outlander, the television series, is based on a series of books by Diana Gabaldon (season two is adapted from Dragonfly in Amber). And while the author has served as a consultant on the show, helping shape what you see onscreen and even making the odd cameo, Saturday's episode was the first one actually scripted by her. Showrunner Ron D. Moore likely picked episode 11 for Gabaldon because it matches its source material pretty well in terms of chronology, which would make it relatively easy for her to transform it into a script, "without doing violence to my sense of composition," she laughed. Gabaldon chatted with Vulture about how Outlander isn't really a romance, why she shot Rupert in the eye, and how much of her script she had to change on set.

Hopefully this season, with all its battles, politics, and court intrigue, helped Outlander shed some of the stigma that comes associated with being a romance story. Because it is, and it isn't ...

A romance is a courtship story. In the 19th century, the definition of the romance genre was an escape from daily life that included adventure and love and battle. But in the 20th century, that term changed, and now it's deemed only a love story, specifically a courtship story. When I first wrote the books, we sold them to an editor who just loved the story. And then the publisher asked her, "Well, now what kind of book is it? We have to think about marketing." And she stared at it and said, "Well, I really couldn't tell you. There's a wonderful love story ..." And they're like, "Oh! That's romance. Bosoms. Fabio." And she said, "Oh no, it's also got time travel and it's a historical novel ..." The historical aspect is accurate, but you don't want to market it like a Ken Follett novel. So the publisher sat on the book for 18 months. They were afraid that if they put it out as general fiction, no one would be able to understand what it is, and it would fall flat. So they very nearly came close to actually giving me back the book and canceling the contract. I didn't learn this until much later, but they mostly didn't cancel because my editor said she would quit if they did. [Laughs.]

Finally, my agent called and he said, "Well, they finally decided what to do with your book! The hardcover will go out with the other hardcover fiction, but they'd like to try to sell the paperback as romance." I had two objections. If you call it a romance, it will never be reviewed by the New York Times or any other respectable literary venue. And that's okay. I can live with that. But more importantly, you will cut off the entire male half of my readership. They would say, "Oh, well, it's probably not for me." So my agent said, "Well, we could insist that they call it science-fiction or fantasy, because of the weird elements, but bear in mind that a bestseller in sci-fi is 50,000 in paperback. A bestseller in romance is 500,000." And I said, "Well, you've got a point!"


So you agreed to sell the paperback as romance?

Provided we had dignified covers — we wouldn't have bosoms and Fabio and things like that — and also that if the books became visible, they would reposition them as fiction. Which they did. When Voyager, the third book of the series, hit the New York Times bestseller list, they very honorably redesigned the covers and started calling them fiction. Barnes & Noble, however, wasn't having any of this. They just said, "The first book you wrote was called romance, so everything you write for the rest of your life is a romance as far as we're concerned." It took me eight years to disabuse them of this notion, but I finally won.

Whenever you're dealing with something that's difficult to describe, that you can't get across to someone in a sound bite, it sounds like the normal default is to pick what's easiest, and in the case of fiction written by women, fiction involving women, fiction involving any sort of relationship, the word that comes to mind is romance. It's canned stuff: "It's steamy, it's stirring, it's sizzling, it's a bodice ripper." And as I say, in romance novels, those are courtship stories. Once the couple is married, that's the end of the story. And in our story, that means we would have stopped at episode seven. I've never seen anyone deal in a literary way with what it takes to stay married for more than 50 years, and that seemed like a worthy goal. On one level, this series is telling the story of how people stay married for a long time.

Tell me about joining the writers room this season. What was it like shifting from being a consultant on the series giving notes, to someone receiving them?

They had already done most of the script breaking, as they call it. They actually take the book apart, all of its components — scenes, sub-scenes, quarter-scenes, etc. — and they strip all the dialogue out, and put it on a separate table so they can pick lines and pieces that make sense. So most of the content was already decided, but not the details, or how it would flow, or what it would be shaped like. So I got to participate in that process. And then you have the freedom to invent other things, little transitions to hold the pieces together, to move from point A to point B.

I have never seen a script that hasn't gone through at least eight different iterations before they even begin filming, and frequently what is filmed is not what's in the script, because things change on the ground. An actor can't say a particular line. An actor will have a brainstorm and ad lib something utterly brilliant. That's why writers are the low man on the totem pole of the production, because when push comes to shove, the script is the only thing that can flex easily. Other things are set in stone: the location, the schedule, the hours of daylight, the actors you can or can't have.


What sort of logistics affected your episode?

One day, we were doing the scene where Bonnie Prince Charlie's men have made it to Derby, England, and that's where they make the fateful decision to turn back. Jamie is arguing to go and attack London, because it would be a change, something that hadn't happened in Claire's history, where maybe they could succeed in changing the past. The Jacobites, there were 5,000 of them, and 30,000 of the British army, so it should have been very obvious to everybody, though it wasn't, that they were never going to win. But they came very, very close to attacking London, and who knows what would have happened if that had occurred? King George II was so terrified by the Highlanders that he was, in fact, all packed up and prepared to flee to Germany. His soldiers were all going to decamp at once, if the Highland army marched into London.

So anyway, Sam Heughan brought me his bit of script for that day, and he said, "Look, this speech here, I have to move from one end of this table to another while I give this speech, and it's too long. I'll still be talking by the time I get to the other end. Could we take out the first two sentences?" And I said, "No, you need the first two sentences, but we can take out this sentence here, and I'll rewrite the last sentence so it's much shorter. How about this?" And that worked.

What about Angus dying in episode ten?

I had several little comic bits between Angus and Rupert, because they're such a great comedy team, but Angus dying was unexpected. So I had to eliminate him and adjust the script for his absence. And I couldn't use the part where Rupert was killed, because they'd already killed Angus and they wanted to keep Rupert. If you can't kill Rupert, what else are you going to do for dramatic impact? As it is, we shot him in the eye.

During an epic horse chase.

All that horse chasing was a lot of fun to watch! It took them two days, and they were running the camera on a wire rig, on a cable for half a mile long, so the camera is following the galloping horses. People would be yelling, "Heads up!" as the camera came racing through the set! People would be ducking and stepping back. And it was pretty tough riding required for that scene. Caitriona [Balfe] and Sam are quite good riders at this point, but not all of the actors are, so they had to use a mechanical horse and stunt doubles and a couple of other tricks, which are completely invisible when you watch the episode. You would never guess that you weren't seeing what you thought you were seeing.


What about the church? There was an issue with using that location because of the fire and the horses?

That's where we ran into real logistical difficulties, because I wrote the chapel scene as it was in the book, for most of the way. They head to Inverness with the Lallybroch van, and run into a British ambush, which scatters them, and they take refuge in the chapel. But they couldn't find a chapel or any kind of church that would let them take horses inside, so we had to eliminate the stuff that had to do with horses.

How much of what you wrote would you say made it into the episode?

In the end, probably about 50 percent of that script is actually the way I wrote it. But I expected that. When I see all the daily footage, some really wonderful stuff doesn't end up in the final episode. I might be like, "Oh my God, why didn't you use that?!" Because there just isn't room. It can only be 55 minutes long. But it's a really nice, fast-paced episode.