The Vulture breaks down the changes from Book to show, episode 11


How Outlander’s Revenge Scene Came Together

For the full article
http://www.vulture.com/2016/06/outlander-fight-scene-came-together.html?mid=twitter-share-vulture

Spoilers ahead for the most recent episode of Outlander.

When Outlander decided to make a major change from the books by having Mary Hawkins kill her assailant, they did so with the blessing of author Diana Gabaldon, who wrote the episode and helped choreograph the pivotal fight scene.

"Rape is a pretty serious thing we deal with in the show, and we wanted to treat it right," showrunner Ron D. Moore said. "We use it as a plot device, but if you use it as a tool, then treat it correctly. Try not to cheapen it. Give it its value."

"We tried to show that Claire is Mary's mentor, and her confidence and empowerment have rubbed off," co-executive producer Maril Davis added. "Mary comes back and gets hers, in a way that's not making her too modern and still keeps with her character."

First, they needed the right setting — a stately home for the Duke of Sandringham — and what could be better than the home of an actual duke? Production designer Jon Gary Steele found images of Drumlanrig Castle in a book, and shared it with locations manager Hugh Gourlay, who then sought out the Duke of Buccleuch, owner of the estate. A private man, he didn't care much for the idea of a TV crew coming by his castle (or having Outlanderfans stopping by in droves once the show had aired) but his house manager — actually an Outlander fan herself — convinced him otherwise. And soOutlander not only got permission to use the castle itself, but the estate grounds (which subbed for scenes in several episodes) and the authentic and well-maintained 18th-century furniture, paintings, and tapestries inside the building.

Then they needed to stage the reveal that both Sandringham and his valet Danton were behind the attacks in Paris. ("Call me a professional n'importe tout faire, as we say in French," said actor Andrea Dolente, who plays Danton. "You know, someone who can do anything: raping, stealing, hurting, whatever needs to be done.") The scene between Claire and the Duke needed some tweaking — "I rewrote it three times, Ron semi-rewrote it once, and Anne [Kenney] and I rewrote it twice," Gabaldon said — as the dynamic between the characters shift. "For one thing, he's not being straight with her to start with, and for another, he thinks he's got her in his power, so he thinks she's helpless and he's not as guarded as he might be otherwise."

At the moment Sandringham admits his part in the rape, actor Simon Callow wanted to pop something in his mouth, a delicacy that could demonstrate his character's utter delight in telling the story. "If you have to kill or rape someone, let's make it fun!" Callow said, explaining Sandringham’s perspective. And so the props department scrambled to find something period-appropriate. "Don't even get me started on the bonbons," laughed set decorator Gina Cromwell. "Simon wanted chocolate, and chocolate wasn't solidified yet at this point in history, so we had to disguise the chocolates with a glaze of icing sugar to look like something else."


Later when Claire tries to escape, she encounters the Duke once more in the kitchen, where he is, yet again, eating. More people gradually enter the room, and eventually the fight breaks out where Mary stabs Danton, and Murtagh beheads Sandringham. Staging that sequence turned out to be rather complex. They first blocked it in the stunt room at their production stages in Cumbernauld, but the plan wasn't coalescing. "We were trying to figure out the choreography," actress Caitriona Balfe, who plays Claire, said. "We were all trying to come up with ideas." The actors tried out a few moves, but they kept ending up on the wrong side of the room when they needed to grab a knife or throw it away, to stab someone or throw them into a wall, all because the kitchen table kept getting in the way. "Diana listened to us for a few minutes, and she quickly came up with a solution that was a big 'Aha!' moment for us," Balfe said. "We were like, 'Why didn't we think of that?'"

"I told [director] Mike Barker, 'You've got too many knives,’” Gabaldon explained. “You only really need one.’"

From there, the actors rehearsed the scene the night before filming in the next location, the kitchen of the Callendar House, where they had decided Claire would break free of Danton's knife at her throat, slam his arm on the table, and take the knife, while Mary would stab Danton. But "this left Jamie and Murtagh at rather loose ends, and the Duke floating around at the wrong end of the room," Gabaldon said. The author offered another suggestion to help with the fight choreography — the men could act as protectors. "Any male primate, from gorillas on down, will grab the nearest female, put her behind him, and charge the threat," she said. Actor Sam Heughan came to the same conclusion, even though he hadn't heard her comment to the director. At the next run-through, he stopped what he was doing and said, "No, no. I wouldn't do that [as Jamie]. I'd shove Claire behind me and go for Danton." With the writer and actor in agreement, the director assented.

In the final cut, Danton holds a knife to Claire's throat, Jamie's at bay, Murtagh enters from the back door and breaks Danton's concentration, Claire elbows him in the ribs and breaks free, the knife falls to the floor, Jamie lunges for Danton, throws him on the floor and slugs him. "Everyone's fighting, everyone's attention is elsewhere, and then in the background, I go and take the knife," said actress Rosie Day, who plays Mary. "I take my revenge on the man who raped me." The Duke backs away, straight into Murtagh, who's picked up an ax. "And ... bloosh," said Gabaldon. Off with his head. 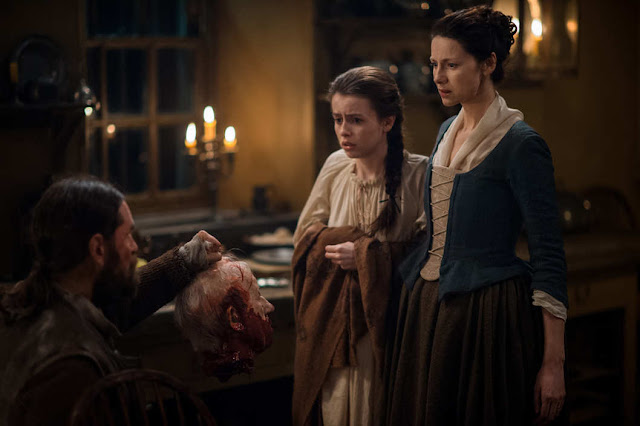 Posted by Outlander Homepage at 8:15 AM