“A Friend Indeed” ~ Simon Meacock talks to Outlander Homepage about the return of Hugh Monroe An interview compiled by your Aussie blogging lass, Susie Brown

While episode 10 saw the departure of a much loved character with the death of Angus Mhor, episode 11 saw the return of a season 1 favourite. 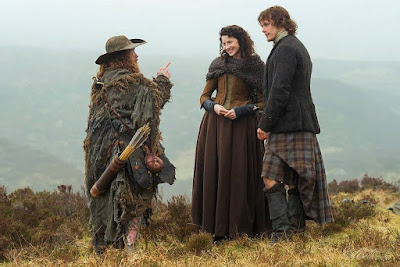 Hugh Munro, last seen atop a rainsoaked hillside with news for Jamie and a gift for Claire, returned this week to provide some much needed help to the couple. Hugh’s portrayer, Simon Meacock, kindly agreed to share his thoughts on filming Hugh’s return and what it was like working with Diana Gabaldon. He also revealed his hitherto unknown powers of weather control!
****


The lovable character of Hugh Monroe was first introduced to Outlander’s viewers in episode 8 of season 1. Hugh spent his days as a beggar, wearing official gaberlunzie tokens to identify himself. Through Jamie’s explanations to Claire, viewers learned that Hugh had been captured by the Turks. Boiling oil had been poured on his legs and his tongue had been cut out, making speaking virtually impossible. 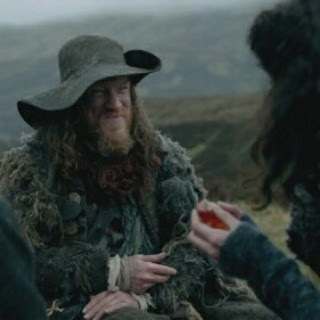 But Jamie and Hugh had developed their own method of communication, allowing the older man to give Jamie a vital piece of information. After being introduced to Claire, Hugh immediately presented her with a wedding gift - a dragonfly encased in amber. It was a short scene, but one that established a friendship between the three characters and hinted that their paths may cross again in the future.

No one was more pleased to see Hugh’s return this season than Simon Meacock, the actor who brought the character to life on the screen. “It was great to be back for the second season of Outlander,” he said, “and for Hugh to be much more involved in the plot this time round. It was great to see Hugh in action too. I had a lot of fun beating up a messenger and taking out an English soldier during the course of this episode!” 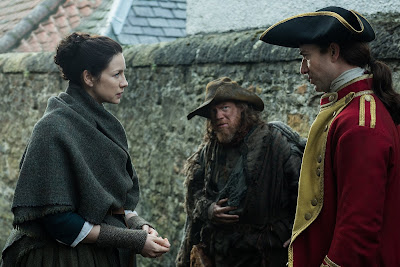 An added bonus was the fact that the action was written by none other than Diana Gabaldon herself.

“It was an honour and a privilege to work with Diana on this episode. It made it extra special knowing that she had written it,” Simon explained.  “It was also great to be able to chat with her on set about Hugh’s backstory and to be able to delve deeper into who Hugh is as a character. I was obviously glad to find out that they had made the decision to keep him alive for this episode too, as I was aware that in the books he’s not so lucky!”

Indeed, in the books, Hugh is captured in the grounds of the Duke of Sandringham’s estate and is hanged for his trouble. In the tv version however, Hugh is able to deliver a message to Jamie, lead both Jamie and Murtagh to the house where Claire has been taken and overpower an English redcoat, all without losing his own life! The only downside, Simon explained, was the weather. 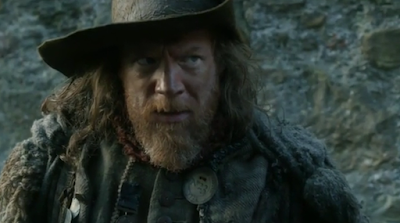 “We filmed most of this episode in awful conditions – something that I seemed to be blamed for! The weather would be fine and then I’d show up on set and the heavens would open!”

But the weather didn’t dampen anyone’s spirits for long.

“Outlander has such a great cast and crew who are all so welcoming,” said Simon. “It was wonderful filming it.”

Simon was also witness to some excitement whilst filming his scenes. “I was actually on set when the Golden Globe nominations were announced,” he said. “Everyone was delighted to get the nod after just one season.”

Since finishing his scenes for season 2, Simon has been busy with other projects, some of which are screening right now. For UK fans, Simon portrays the character of Jason Briggs in the third episode of Agatha Raisin, which screens on Sky 1 on 21st June.  Australian fans may have recognised Simon on the first episode of The Coroner, which screened on the ABC on 18th June, and is available on iView until 3rd July. Simon will also appear as the prison guard in the feature film, The Limehouse Golem. It is currently in post production and will screen, according to Simon, “most likely next year.”

We’d like to thank Simon for taking the time to share his thoughts with us. We’re sure we’re not the only ones to hope that since tv Hugh is still alive, he might reappear in season 3 or 4!

Posted by Outlander Homepage at 9:43 AM